How to Handle Your Guinea Pig

Guinea pigs are gentle animals with delicate bones. Since some guinea pigs have a tendency to jump (especially when you are returning them to their cage), it is important to learn how to hold and carry them safely. Falls and jumps can result in broken bones, injury, and sometimes death. Young children should not be allowed to pick up or carry guinea pigs (see warning below). 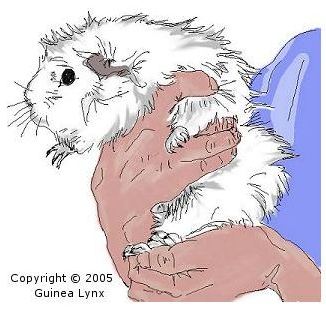 Support the entire body. Wrap one hand securely around the chest. Restrain one front leg by placing a finger in front of it. Use your other hand to support the hind feet and rump.

This hold is particularly helpful with nervous guinea pigs who have a tendency to nip and bite when being transported (carrying can be very scary for a guinea pig).

Chii describes her excellent method of dealing with squirmy jumpers. She uses this technique for all her pigs and finds it has made a noticeable difference within a few short weeks on every one of them:

"When you go to put down the pig (make sure you have a good hold on it), hold it just above the floor of the cage (just a couple of inches), but do not put down the pig as long as it squirms. Just hold it firmly and securely. When it finally stops struggling, place it on the shavings, but don't let go. The pig will usually immediately try to run the second you put it down. Keep holding it firmly until it stops struggling. When it does, let go."

She finds that they quickly learn not to struggle when holding them or trying to put them down. "And they don't try to flee the second they feel a shaving under their feet."

Chii explains how she reviews this technique with each adopter (especially ones with children). She recommends that adults work on this every time they hold the guinea pigs. In this way, there is less danger of being dropped due to squirming and jumping when someone with poor coordination, experience, or small hands (like a child) holds them.

WARNING: Young children should not be allowed to carry a guinea pig. They may squeeze too tightly or accidentally drop a guinea pig with tragic consequences.

Cavespringpiggie suggests to her adoptive families with children:

She writes: "Our very first rescue pig was dropped by one of her new family members after having her for just 1 week. She broke her back and her young owner was very traumatized."

The Trap : Sometimes guinea pigs will run into boxes or cozies and can be lifted out. Or if you use PVC tubing and your guinea pig runs inside, place a hand securely at each end and lift carefully out of the cage the tube containing your pet. Make sure whatever they are in is not flimsy and that there is no chance the guinea pig can slip out of it and fall.

In time you will learn how to corner and outwit your guinea pig. The smarter owners learn quickly. The wily guinea pigs may win for a while but eventually learn being picked up isn't all that bad.

If you happen to have a pregnant guinea pig, handle it as little as possible late in the pregnancy. A sturdy box with one side that can fold down can be used to safely transport a guinea pig. Allow the guinea pig to walk inside the box. Raise the side and then carefully lift the box and guinea pig out of the cage.