Oh he is. When I put him back in his cage after cleaning his eye, I put him in head first. He spins around and rushes up to the front for his carrot. He grabs it like "yeah you better give me something good after doing that to me". He's definitely got attitude, but he's a love bug too. He's by far the best guinea pig ever.
Top

Mr Bubbles has turned 6 years old now. He seems to be doing well. His eye has mostly cleared up. He's got some slight drainage from his nostril on that same side. Nothing major but we're monitoring him closely for that, arthritis, weight loss (no signs of either yet) and everything else that comes with his age. Thought you would want to know.
Top

Sounds pretty good for a 6 year old. A lot of pigs don't make it that far. To be 6 and healthy is great!
Top

Happy Birthday to Mr. Bubbles! So good to hear his eye is mostly cleared up. I know you both have been battling this for a while.
Top

Happy 6th birthday Mr Bubbles from me and piglets down under. May your treats be plenty!
Top

Happy Birthday to Mr. Bubbles! Sounds like he's doing well and getting great care in his senior years!
Top

Mr Bubbles passed away peacefully of respiratory failure in my arms today at 1130 AM. He was 6 years and one month old. I thought you should know.

He wasn't just a guinea pig. He was my wingman and best friend.
Top

I am so sorry. I could tell he was very important to you. It's always hard to lose a pig, but I feel pretty good if I can get a pig to 6 years.
Top

I am sorry for your lost. RIP Mr Bubbles run free in perfect health with your buddies and munch on the green grass. He will never be gone! Look in your heart and he will always be there! He knew how much you loved him and to leave in your arms was a perfect way comforted and happy for his final journey! Sending big hugs!
Top

I am so sorry you lost Mr. Bubbles. It sounded like he was such a special guinea pig. I know he will be missed. You have all our sympathy.
Top

I'm crushed right now. I'm barely functional. This one hurts more than any other guinea pig I've lost. At one point, I wished I could go to the rainbow bridge with him, but my better sense kicked in and I realized how ridiculous that was and that I'm needed here for my family and my remaining pets. I'll post his tribute later. I still have a lot of processing to do before I can do one that does his life the justice he deserves.
Top

I'm sorry this is such a hard time for you. Once in a lifetime pets that you bond with are so difficult to lose. I know it will take time but hope that one day when you think of him it is not with deep sadness but instead remembering joy and love.
Top

You know as we always said Legends never die..legends live forever and so will Mr Bubless..And i bet you told him he s the best everyday, so its no more there to be said..i ve never regretted i didnt *say* something to our animals-they knew they were, are and always be the best, so..you can have peace with that and be honoured you had opportunity to be his best friend out of all the people out there.

Rock on on the other side, little piggy!

A tribute to the best guinea pig I've ever known:

I hardly know where to start. Mr Bubbles and I shared so much love and companionship that we were more like brothers than pet and human. I have so many amazing memories of him; enough to last 2 lifetimes. In the 6 years and one month of his life, he only clicked his teeth in anger once when he and Scruffy got into a fight during their attempted pairing. He knew only joy and happy times his entire life. He was the center that my life revolved around. He was always there when I needed a friend and he never let me down. He never caused me any grief, even when he passed away in my arms. He went so peacefully that there was none of the traumatic things that guinea pigs normally do when they pass. I honestly believe that he knew it would be hard for me to go through that and spared me. I always gave him the best of everything I could.

There were many times that I believed he and I had a psychic link between us. We knew each other so well that I could feel it when he wanted or needed something. For example, I'd have some weird dream about him and water and I'd go look in on him and find he had emptied his water bottle and wanted more. I'm a hard sleeper, but he had a way of waking me up for food, water or attention. Things like that happened all of the time. He could always tell when I needed him too. After every loss of a guinea pig, he knew that I took it hard and offered me the comfort I needed. Any time I felt down, he was there with guinea pig kisses, hugs and that purr which has a calming effect. He could always turn my frown upside down.

He made me a better caregiver. Having him in my life is an honor I'm not worthy of but will always strive to earn by how I care for all of my furry friends. Rest well my little buddy. Find peace in the knowledge that you made our lives better having shared yours with us. I will see you again in the next life. 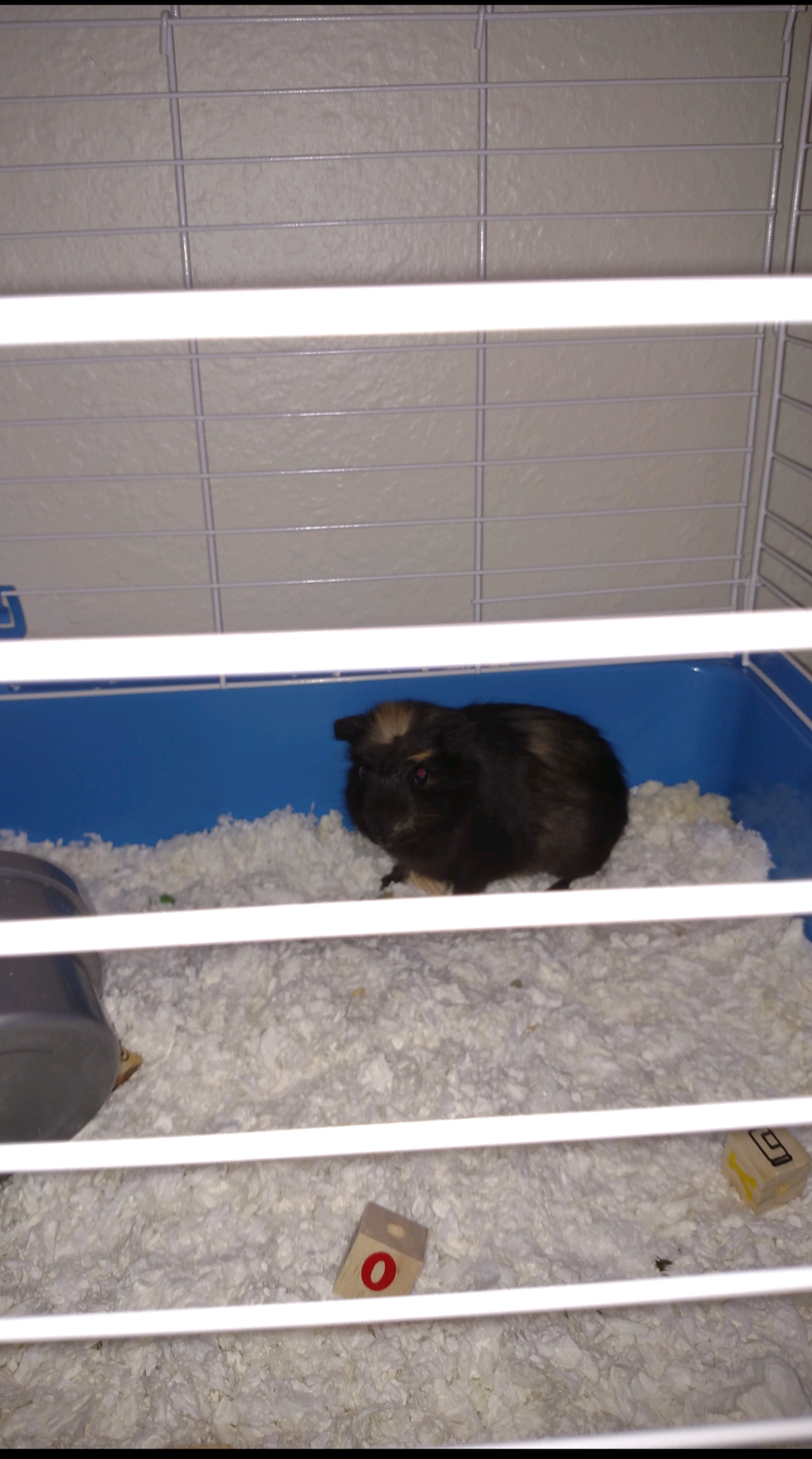 This is him as a pup the day after he came to our family. He was so tiny and scared all by himself in that big cage, He got over that in less than a week. He always climbed into our hands. We never once had to chase him around to pick him up. 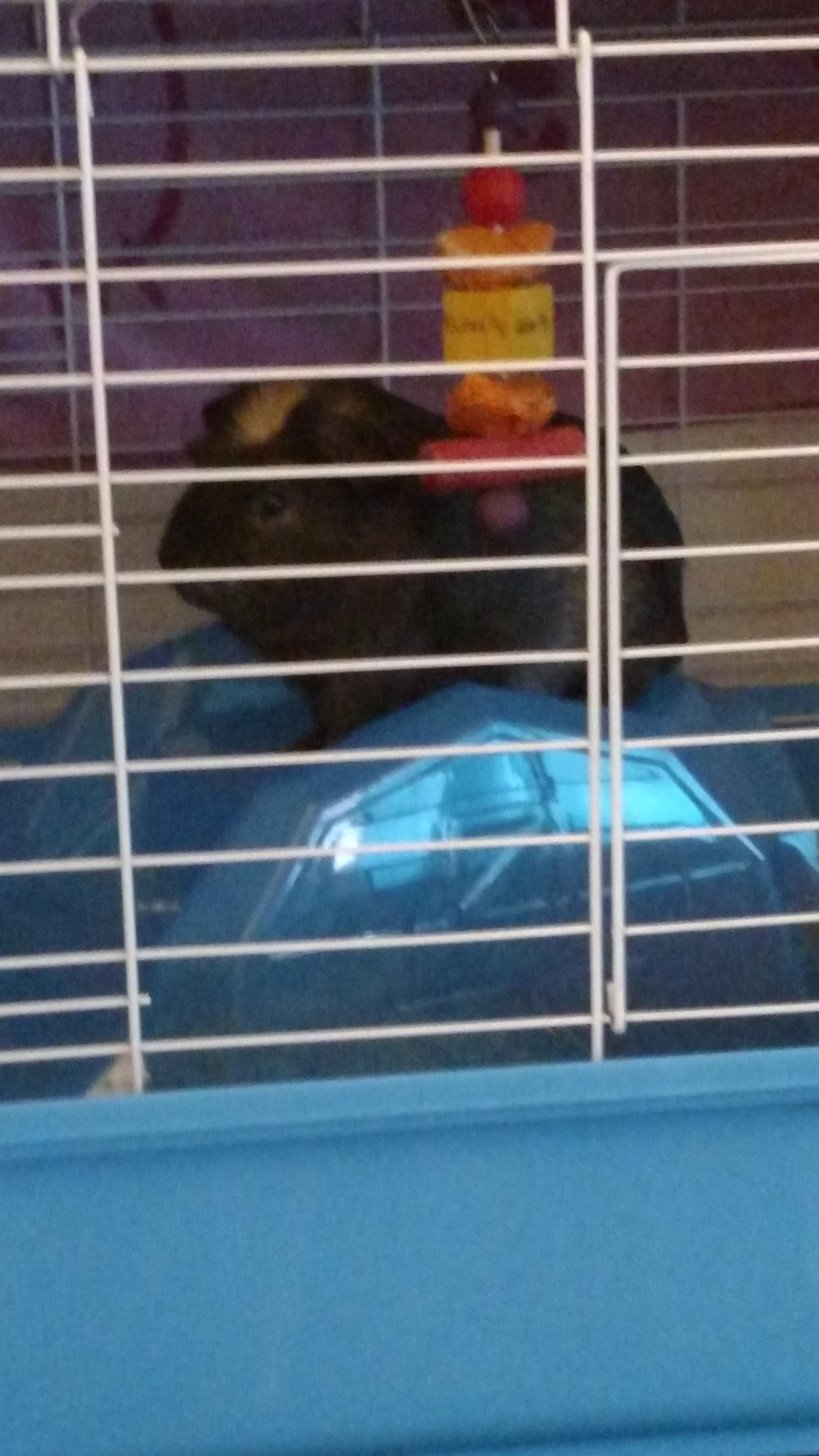 He sat on his house at first. Not sure why he stopped doing that. He did teach Scruffy to do it before he got out of the habit. 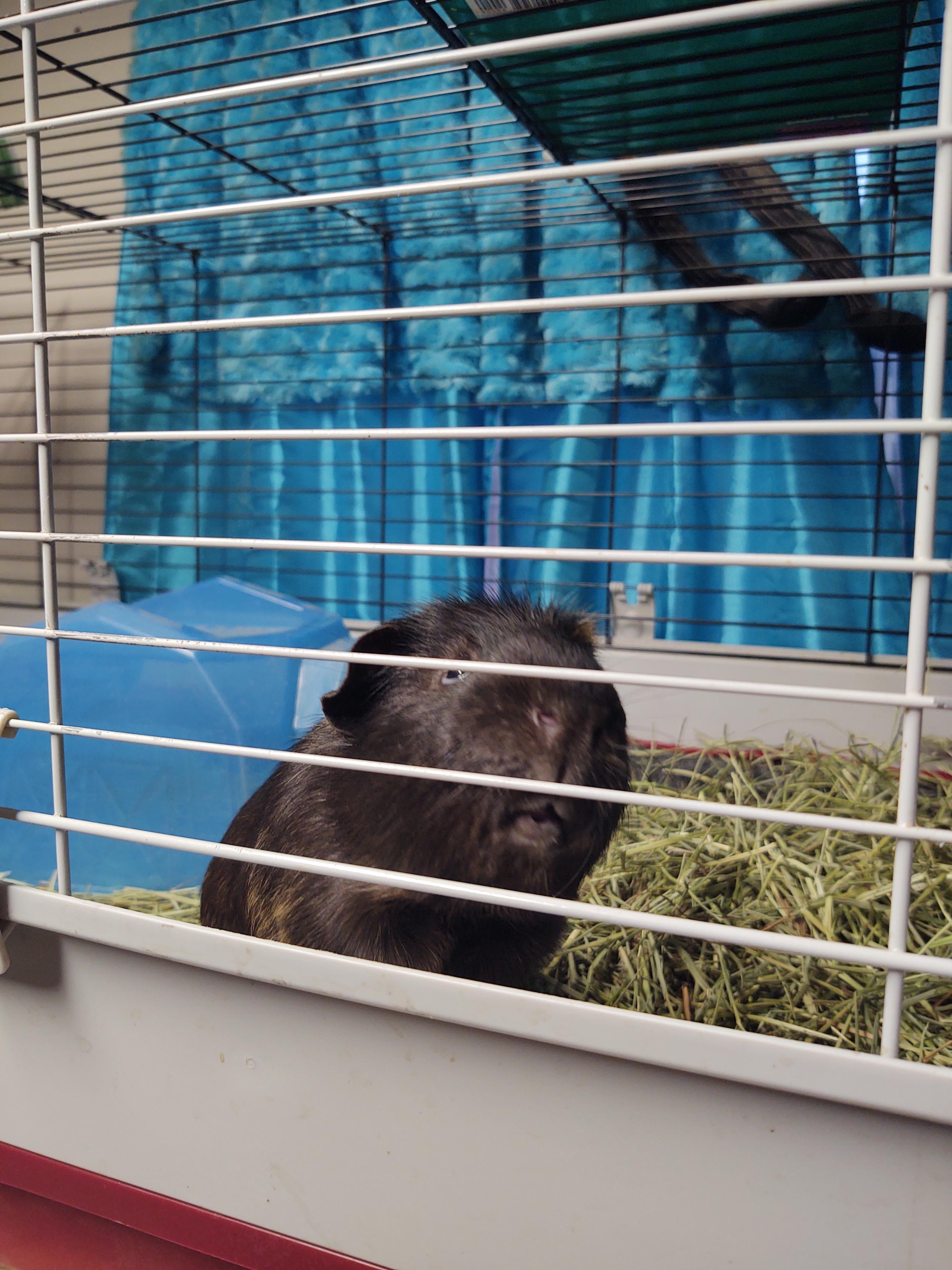 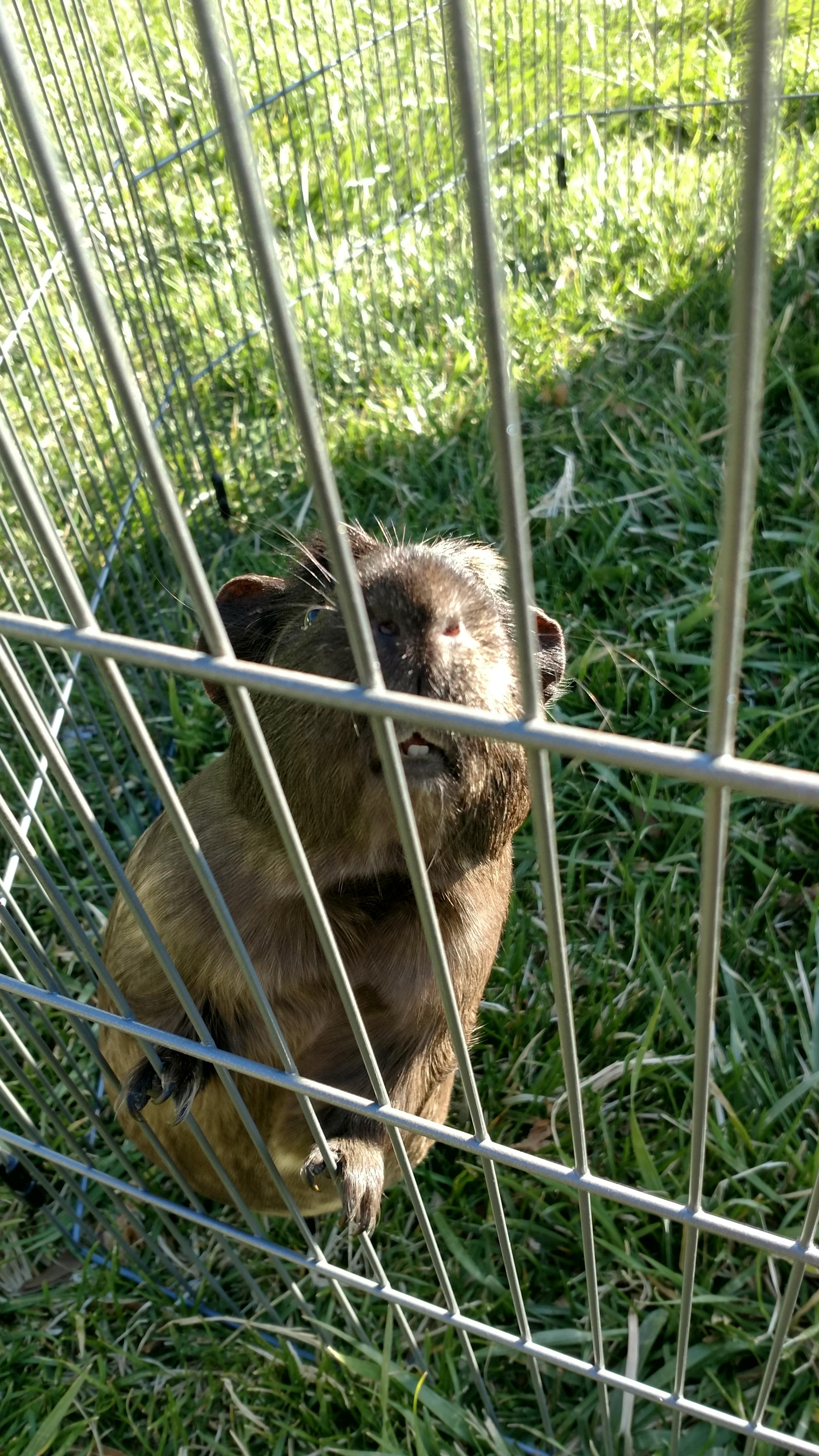 Greeting people who approach him in his cage was his specialty. It didn't matter if he was inside or outside finishing up his grazing time. He never missed a chance to say hello and beg to be picked up. 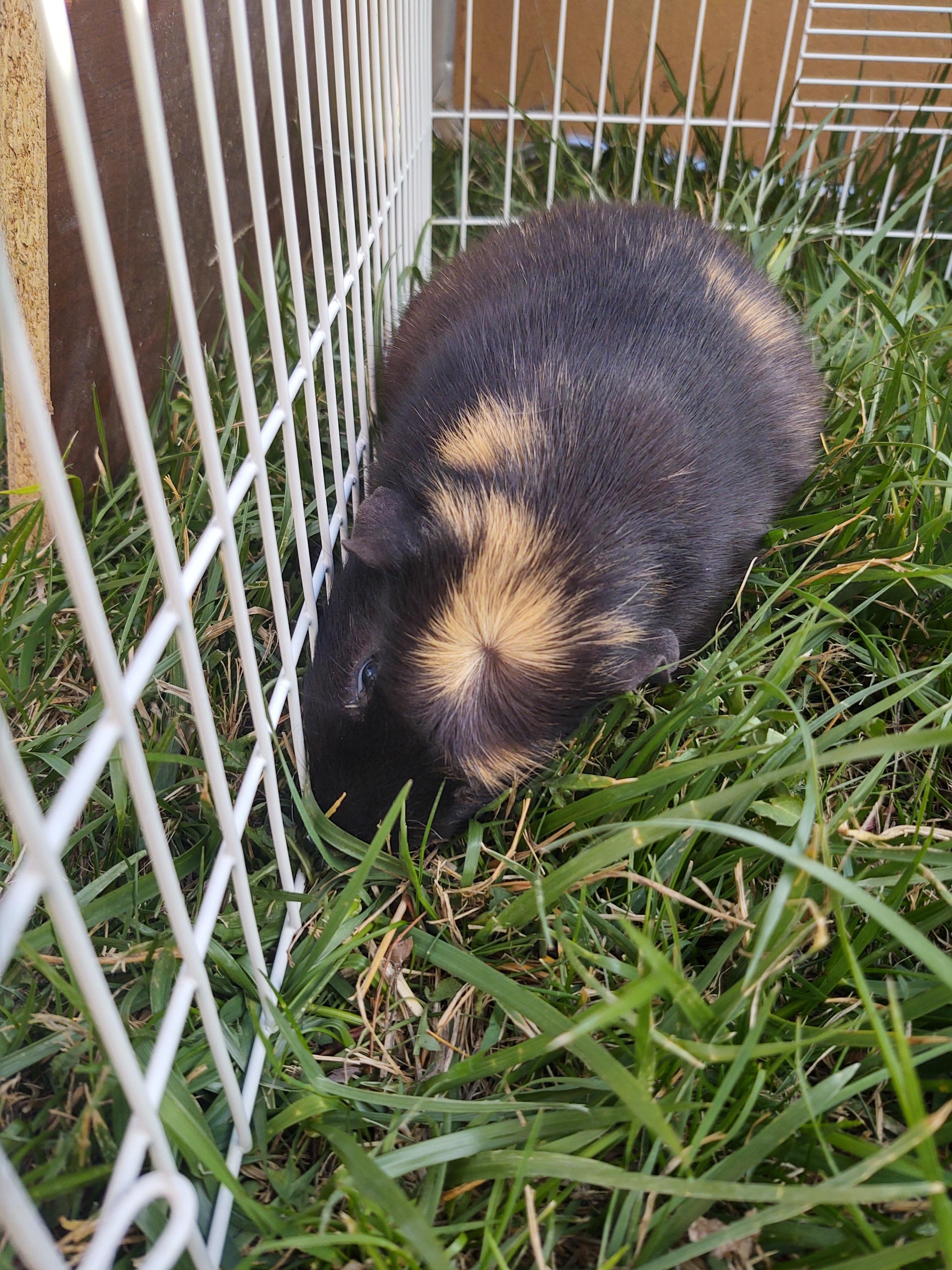 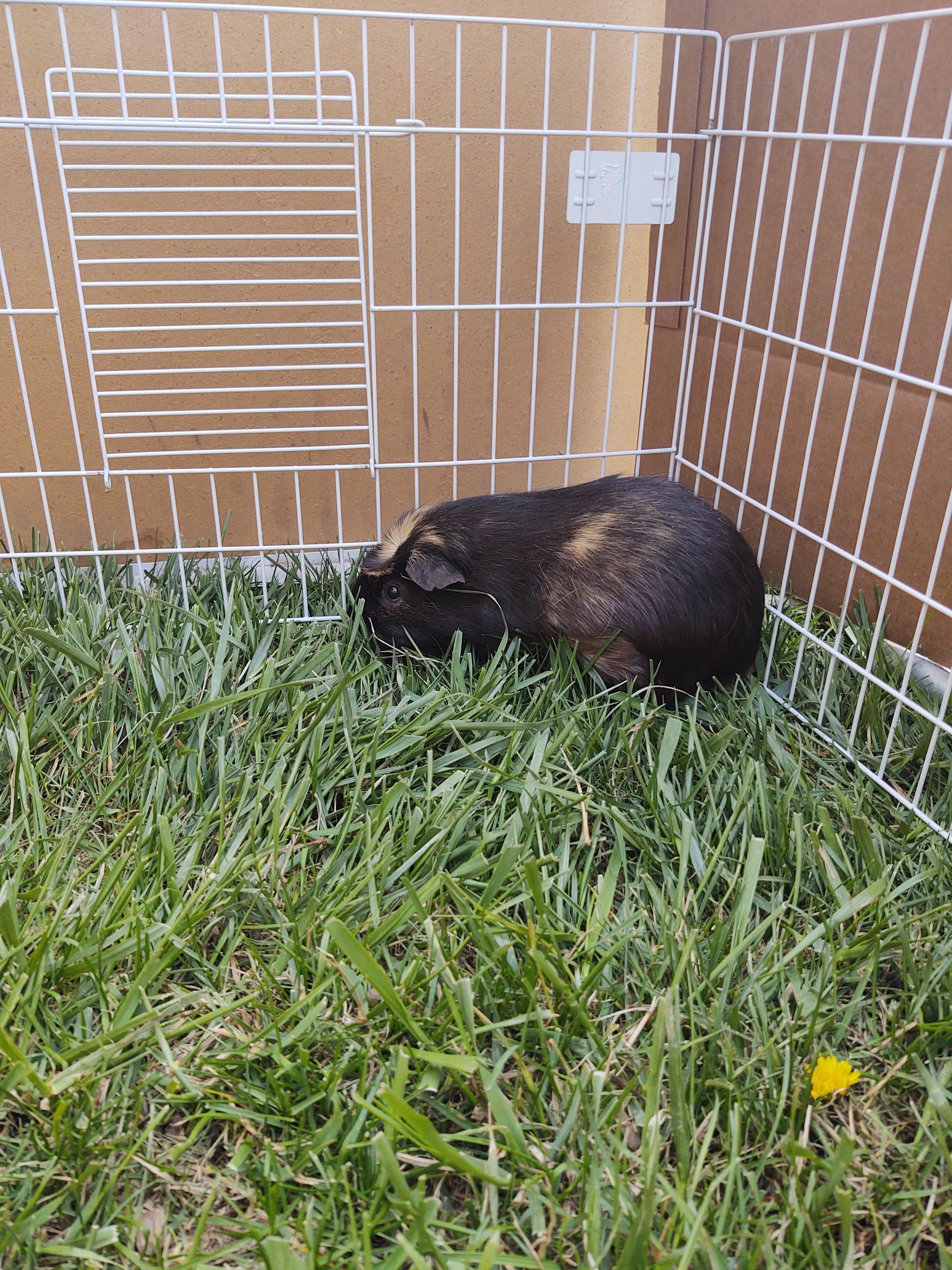 Speaking of grazing outside, he was a master at it. That was his favorite thing to do. 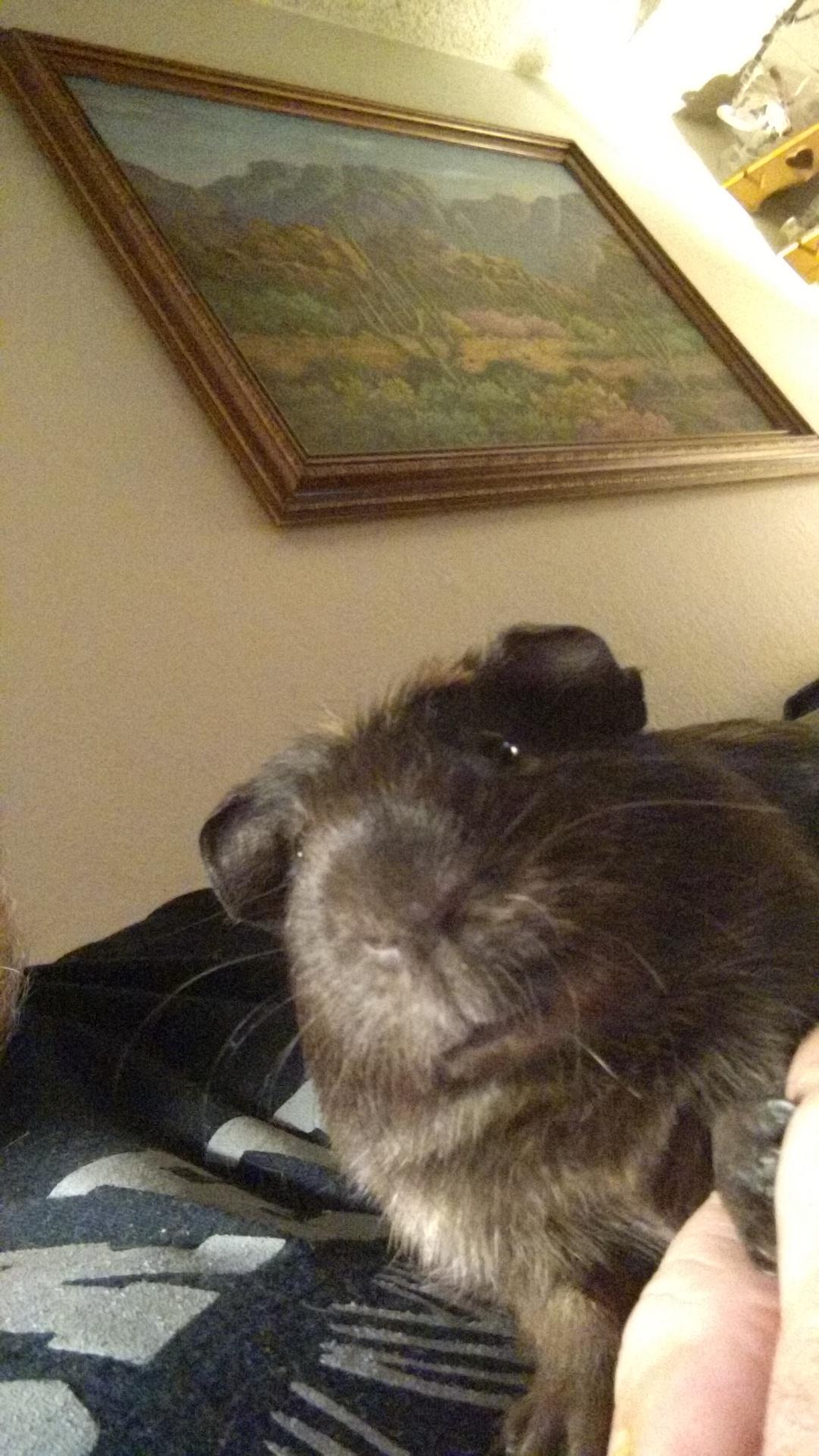 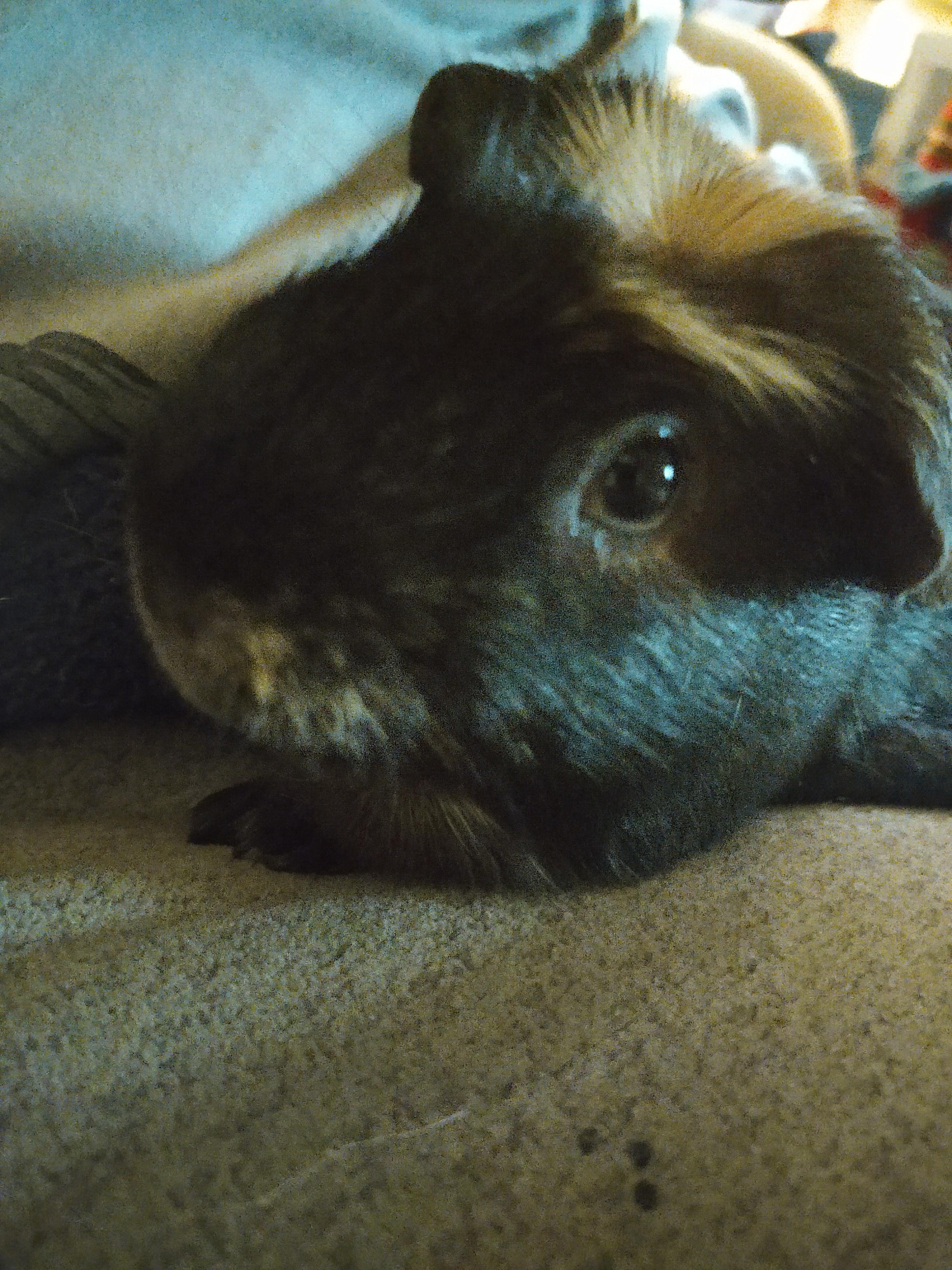 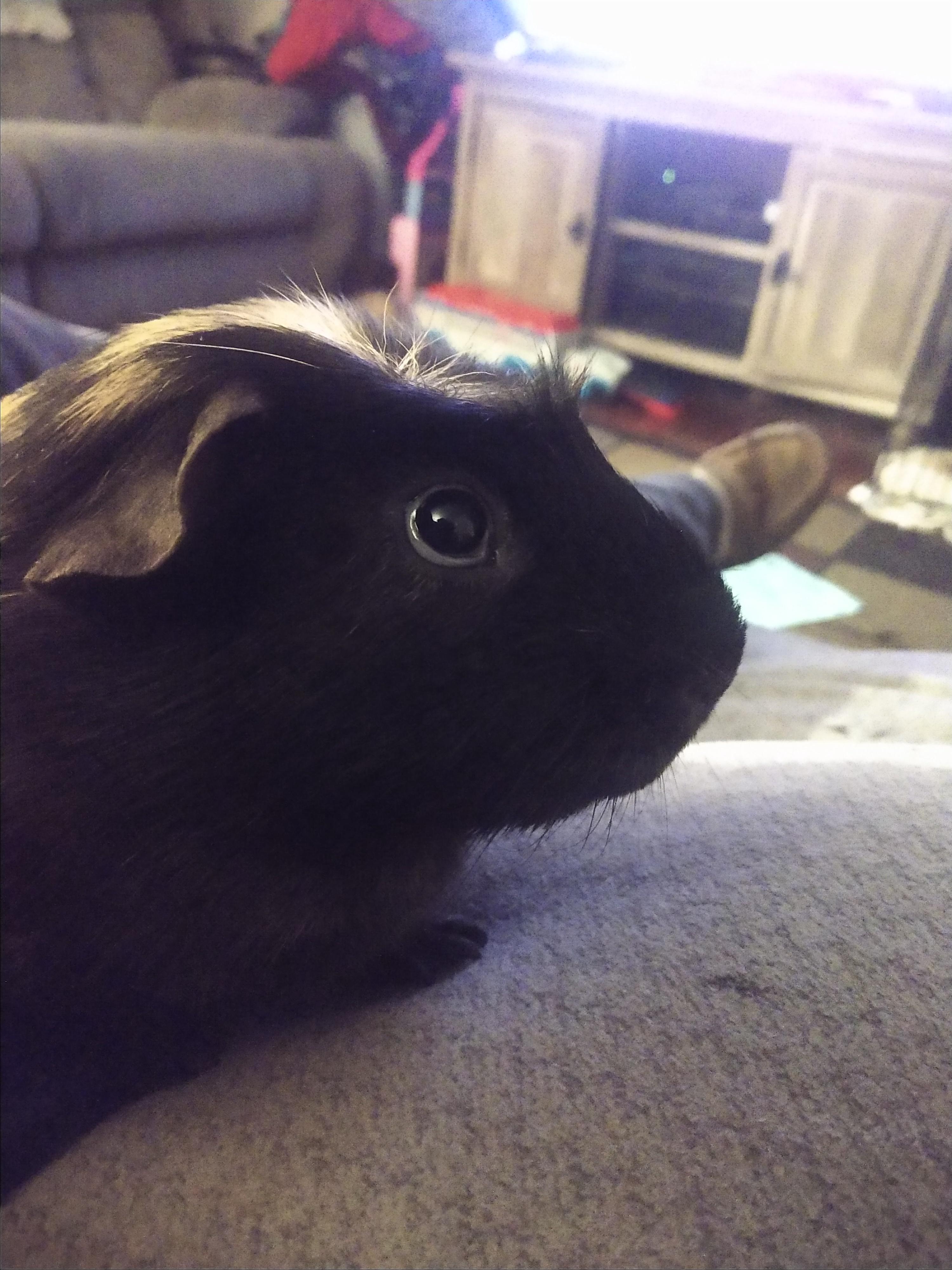 His next favorite thing was lap time. He was the most laid back and relaxed lap piggie I've ever had. He had his way of letting me know when he had to go back to his cage to use the bathroom and he never peed or pooped on me. The trust between us was total and absolute. 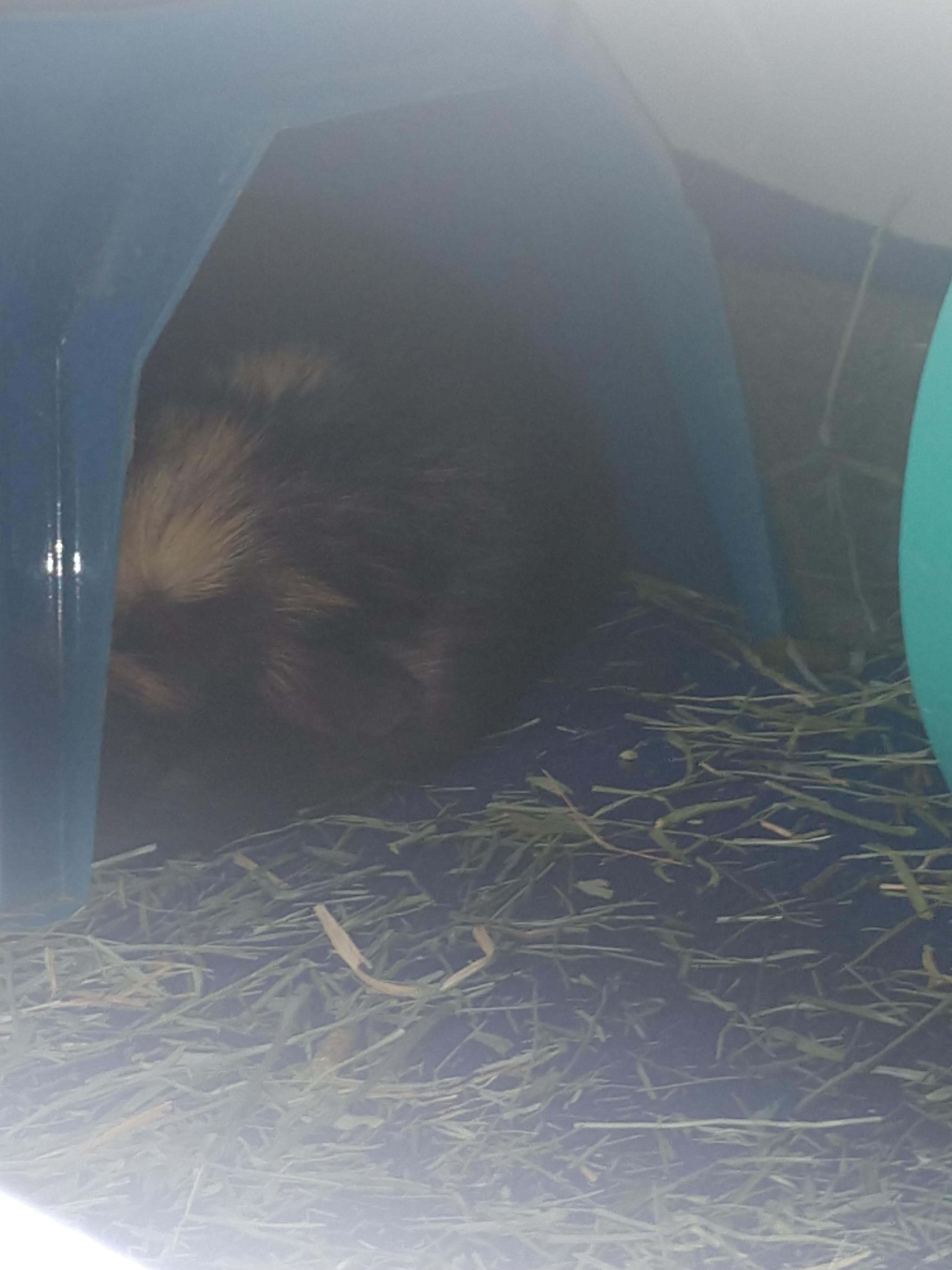 After all of the eating, playing and socializing was done, Mr Bubbles always slept very soundly. He never woke up abruptly. I don't think he ever knew any stress, even when I had to clean his eye, administer meds or hand feed him. Of course the treat he got every time helped. It may even have made him look forward to it. It showed in how soundly he slept and how well rested he was when he woke up.

My life has an empty spot that can only be filled by thoughts of him and the wonderful things he did. Though he is gone from this earth, his memory will live on forever in my heart.
Top

I am sitting here crying after reading the wonderful tribute to Mr Bubbles. What cute lips, tongue and teeth he had! Reading his tribute I felt I knew him too! What a handsome amazing boy he was! God needed another angel and called him home to run with Scruffy and all his furry friends.
He knew he was loved and it is plain he loved you, his work was done! He lived the perfect happiest life there was. He'd filled your heart with love and though gone he will watch other you and be with you in your heart. RIP little man. A beautiful tribute! Sending big hugs! Till you meet again!
Top

I’m so sorry you lost Mr. Bubbles, such a special little guy. What a wonderful tribute, he enjoyed a good life with you.
Top

Thank you for sharing your memories of him. What a special guy. He was a once-in-a-lifetime companion.
Top

"He always climbed into our hands." To be that trusting is amazing. Like something clicked right from the get go. I love his baby pic.

He knew he was well-cared for and loved. "his memory will live on forever in my heart" Yes it will. He'll always be with you.
Top
Post Reply 348 posts


Are you a Guinea Lynx Fan? Tell the world on Facebook!
^
Powered by phpBB® Forum Software © phpBB Limited | SE Square Left Style by PhpBB3 BBCodes
This Document Copyright © 2002 - 2022
* Required Notice:
"Purchases made through our affiliate links may earn Guinea Lynx a small share of the sale."