Out of ideas on why Charlie isn't eating after multiple dental trimmings.

Hi everyone,
I really need your advice for my piggy Charlie, who is a one year old boy.

Tl;dr : Charlie stopped eating and was diagnosed with a dental spur which was apparently entrapping his tongue. His spur was removed and he has had his molars trimmed but he still hasn't started eating on his own and seems to be in pain. His lower jaw seems to be hanging and displaced too and I don't think that his tongue is functioning properly either. 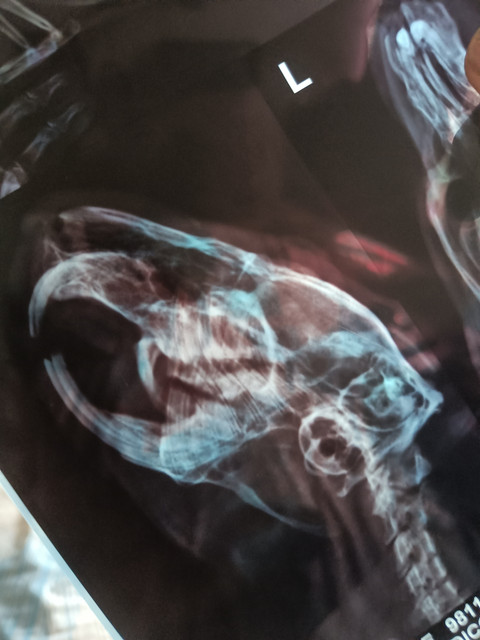 Charlie stopped eating everything except his favorite treats like banana, lettuce etc. Got him checked and found that he had overgrown molars which was entrapping his tongue. The vet also trimmed his lower incisors and probably way too much! Not just that he did it with a nail clipper
The vet removed his spur and put him on a painkiller. I had to keep handfeeding him and I waited for a week for him to show any signs of improvement but I saw none. He wanted to eat but was totally unable to open his mouth to pick the food. Even though it might have been because of the trimmed incisors, even when we fed him his chew speed was extremely slow. 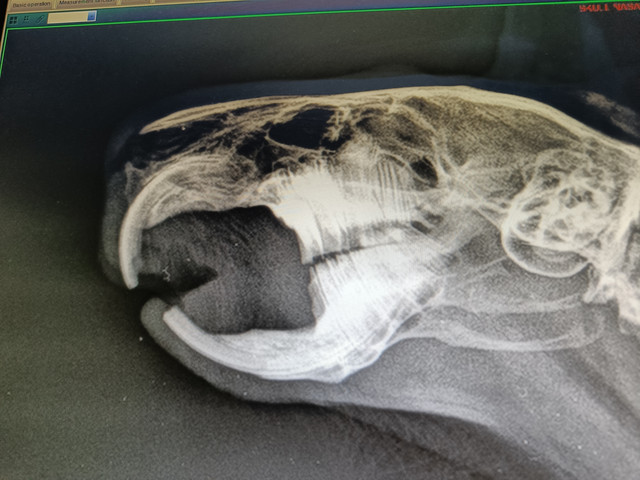 Got another xray done to see that the spur was removed and it mostly looked ok.

I noticed that his jaw was hanging and also seemed to be a little displaced to the right.
I went to another specialist who took a new xray. She said that charlie has some imbalance in the growth of the premolars which might be the reason behind his jaw hanging (not sure of that) but his teeth mostly looked good. She trimmed the molars a bit but she also said that he has some elongation in the roots too. 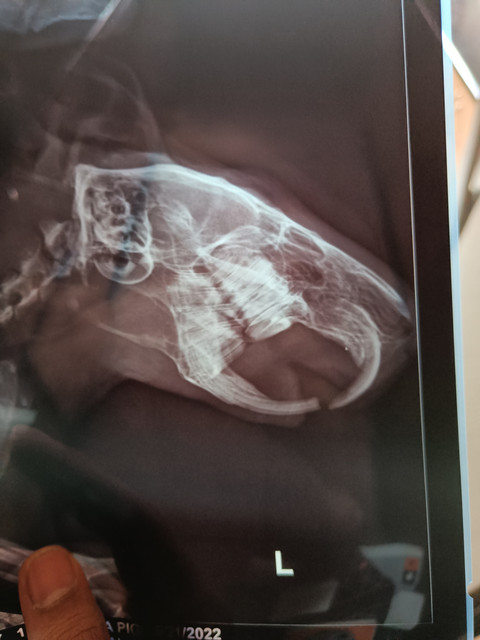 Now this is the latest xray taken yesterday.

Currently, Charlie isn't able to eat on his own. He cannot open his mouth and his jaw is almost always hanging to the right. His chew speed is also very slow compared to normal.
I noticed today that his tongue doesn't seem to be working correctly. I can't see it moving normally when I feed him. He always seems sad and in pain. He is on Meloxicam and Baytril right now. I am considering to make a chin sling for him but I am seriously out of ideas now.
Here is the video of his jaw
https://imgur.com/a/gI8Eqar#7zHMhuX

Do you think his molars still need work? Or if not, if its the jaw or the tongue, what can I do to relieve him of the pain?
Please any suggestions would be really helpful.

PS. I am in India and we seriously don't have many experienced exotic vets here :(
Top

That looks like a very significant misalignment (I wonder if a chin sling would help?), plus the upper incisors don't look discolored and mis-shaped to me and the lowers have sharp edges. I don't know what to suggest, other than seeing a veterinarian who is more experienced in dealing with dental issues in exotics. At the very least, I'd want another vet to evaluate the x-rays. Can your vet post something on VIN? It's a website used by veterinarians to post questions and seek feedback from other vets, and I think it's a world-wide resource.

For now, do you have any Metacam to help with pain? Are you aggressively handfeeding him?
Top

Sounds to me like the first vet dislocated his jaw. I'd look hard for a vet with rodent dental experience and have him reevaluated. If you can't fine one any other way, contact a local zoo and speak to whoever cares for their rodents and ask if they can recommend someone to look at him.
Top

Yes I am currently trying to make a chin sling.
Trust me there are no experienced rodent vets where I live. I will be taking a flight to a city where I believe the best exotic vets are in my country. But that's probably my last hope when it comes to in person appointments.

He is being syringe fed 6-7 times a day and also on meloxicam (0.25ml twice a day). I am hoping I can contact an experienced vet online and get definitive guidance on what can be/should be done by the vets here.
Top