The babies are exactly one week old now. I looked at them closely and it appears that there are 3 boys and one girl. The twins and the Abby all have round shaped genitalia and the other one (brown and white at the far left) has more of a "Y" shaped genitalia. I'll have the vet verify it though.

I should also mention that the vet advised me to hold off loading the new mother and babies up and bringing them in for the first week unless it was absolutely necessary, which is why I haven't done so yet. They're all doing very well, which is a good thing. Now that they've made it through the first week with flying colors, I can get them in for a checkup and sexing.
Top

So glad there may be a girl to be mum's companion. Paws crossed here! Good luck at the vets! I am guessing you have fallen in love and will keep them all. Like your wife wishes! Herd of 12, nice round number!
Top

Loved the pic!! That's good that one of the babies is F so she can be a companion to Buttercup.
Top

The vet can't see the babies until July 21st, at which time they'll be 3 and a half weeks old. They should be able to stay with the mother until then, according to the vet. I have 2 extra cages, so I will be able to separate them as needed based on their genders until such time as we get moved to our new house. They'll all get plenty of space when that happens.
Top

With the help of Sef (thank you so much), I was able to verify that Buttercup has two sons and two daughters. They're growing up so fast. She's already weaned them except for the occasional nurse of the little Abby. It's going to be time to separate the boys from mother and sisters very soon. They just turned 3 weeks old yesterday so I'm going to start giving the boys separate time and by Sunday, when they turn 4 weeks old I should be able to separate them permanently.

I'll have to buy one more big cage when I get to my new house in Missouri. I have Scruffy's first cage and it's big enough for two small guinea pigs until such time as I get the bigger one. They all eat like horses. I can't put too much hay in for them and they go through the veggies very quickly. Buttercup is getting plenty as well. I'm making sure of that.
Top

It's so satisfying when they hay so fast that it's hard to keep up with them. Good idea giving the boys practice being away from Mom & sibs.
Top 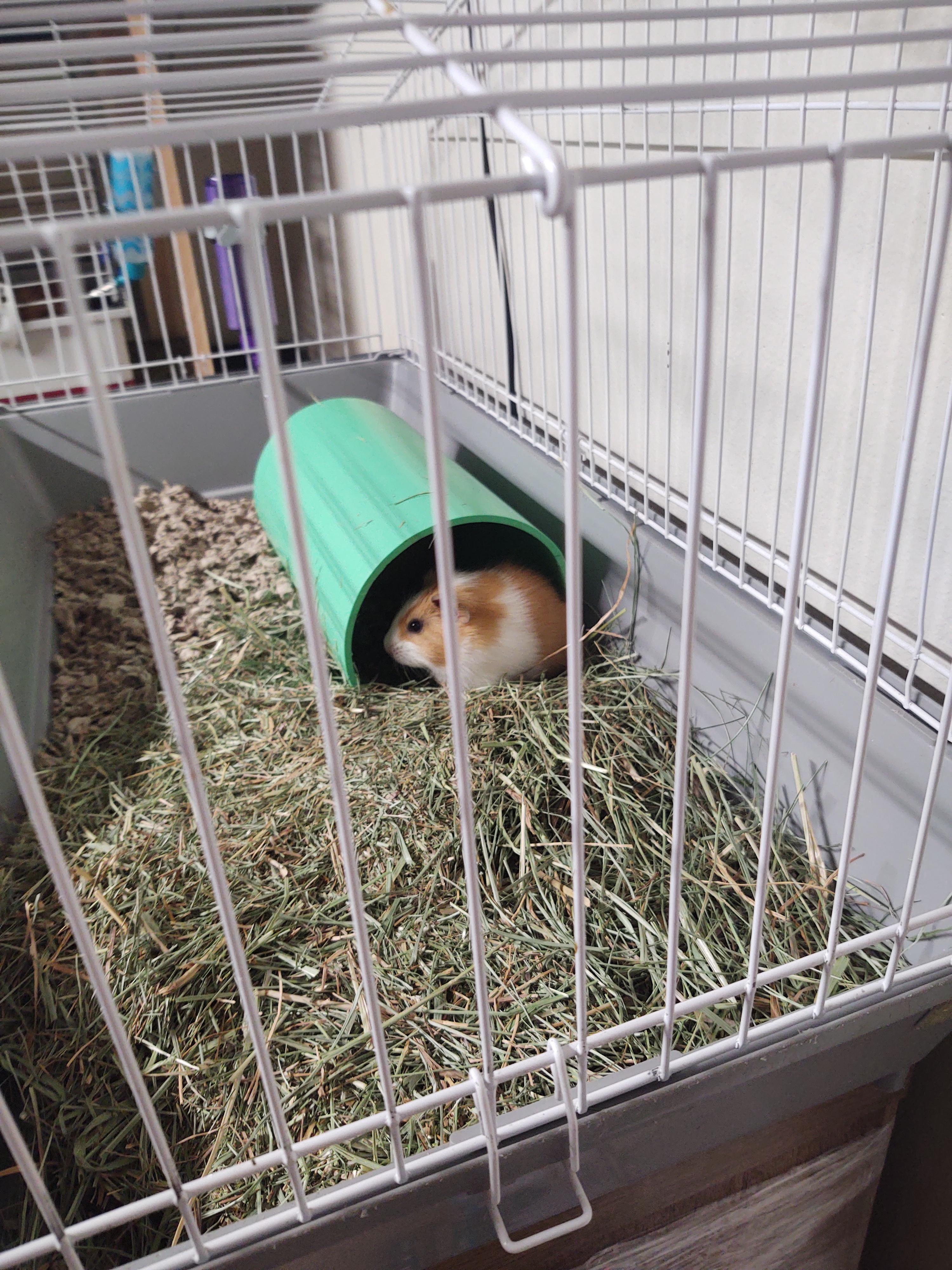 4 weeks old now and not nursing. They are eating hay, veggies and pellets on their own. The time has come to separate the boys from the mother and sisters. I feel sorry for them because they must be frightened of the new surroundings without Mom to hide and comfort them. I guess I'm their mother now, plus they have each other. I don't have a hidey with two openings except for the pipes. I cut the bottom out of it so when they're in it, they are laying on the bedding. That will keep it from getting really nasty when they pee and poop in it.

I had that problem with these tunnels before and ended up removing all but Sammy and Dean's because those two don't lay in them. They only go in theirs when they play or if something startles them. I had also taken Wilber and Grady's out because they totally grossed theirs out. That left them with nothing to hide in. It's not a terrible thing for them since their cage has cover on every side except for the front. I made their day today because I cut the bottom out of another tunnel for them. I made sure not to cut it too short so they can fit in it.
Top

If they have a same sex guinea pig to play with, they will be fine!
Top

Oh, they will be just fine. I know that. I also know that it is the right thing to do separating them and I'm doing it at the right time. That doesn't mean I don't feel sorry for them. Those loud squeaks that sound like they're crying out for mommy don't help. They still have each other and the cage with Gilligan and Skipper is right there where they can all see each other.
Top

I'll start chronicles on Buttercup's babies later, but in the meantime I'll introduce them here.

This one is Muffin. She's a very meek little girl. She is submissive to the other babies and hovers close to her mother. With the boys out of the picture, she'll have less competition, but I'll have to make sure the other girl and mom don't prevent her from getting enough food and water. 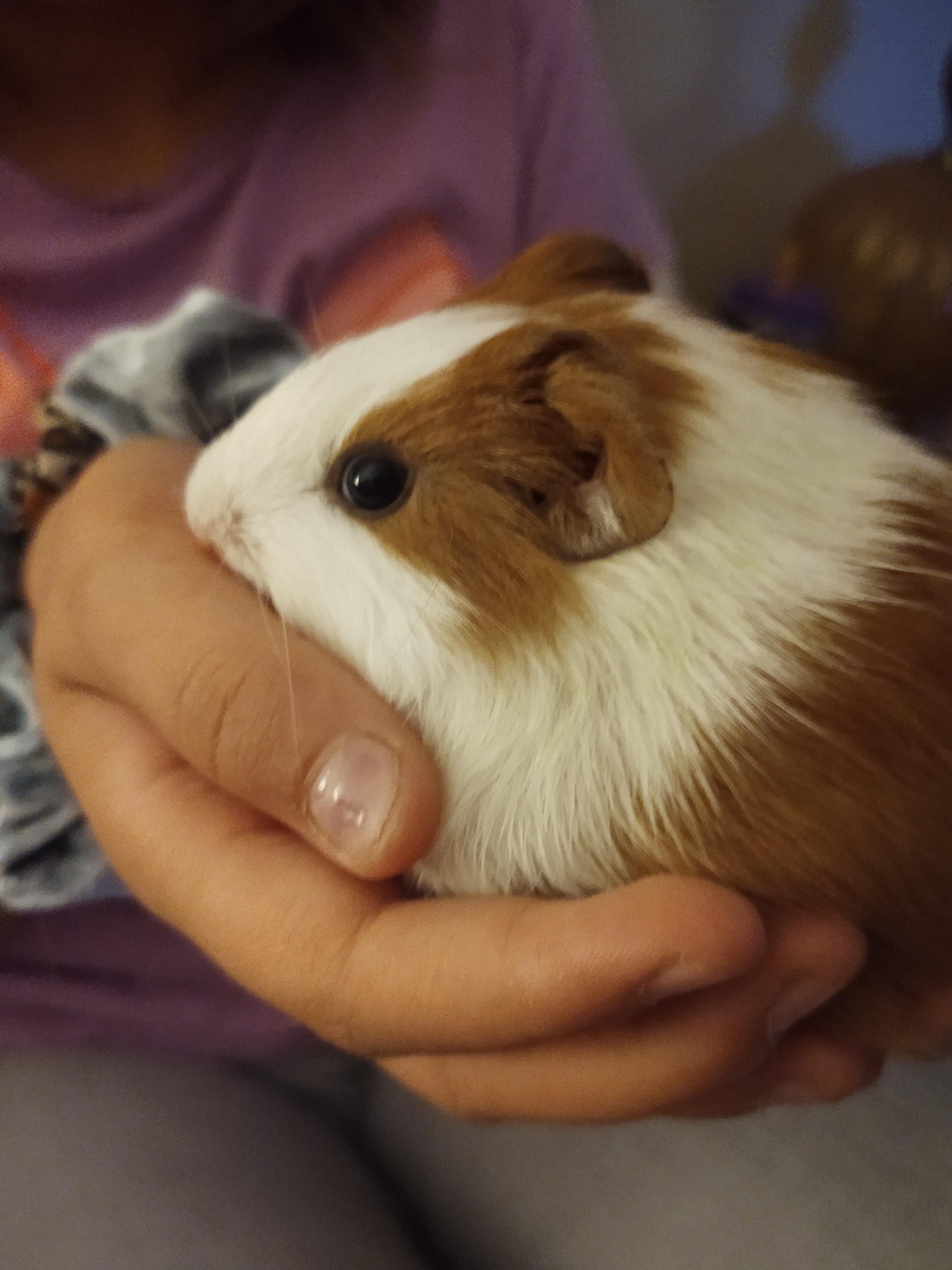 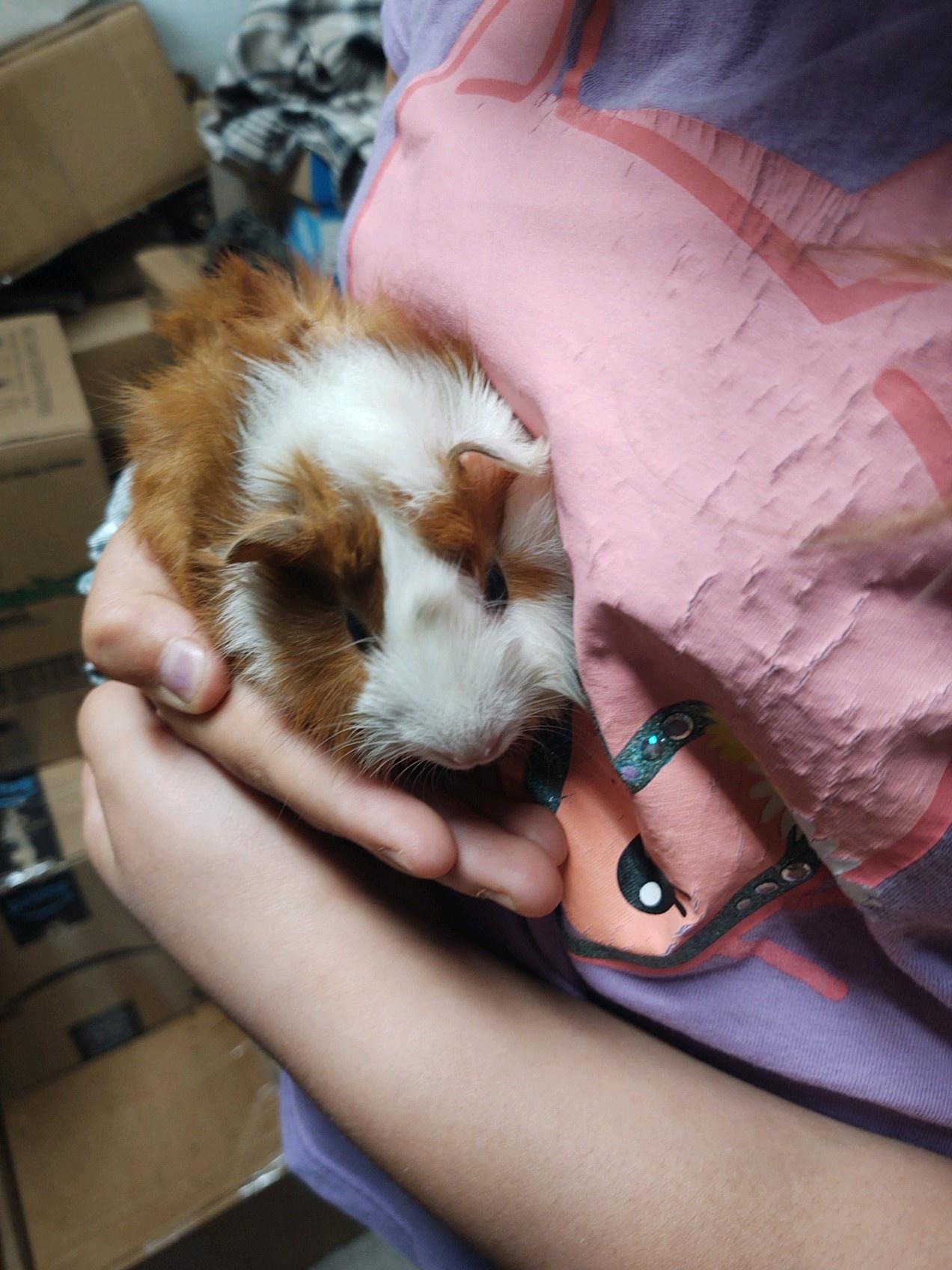 Here's one of the boys. My wife named him Kahlua for his coloring. Pretty fitting. Not sure about his personality quite yet, but he doesn't seem to mind being held once you pick him up. He's also the most vocal of all the pups. 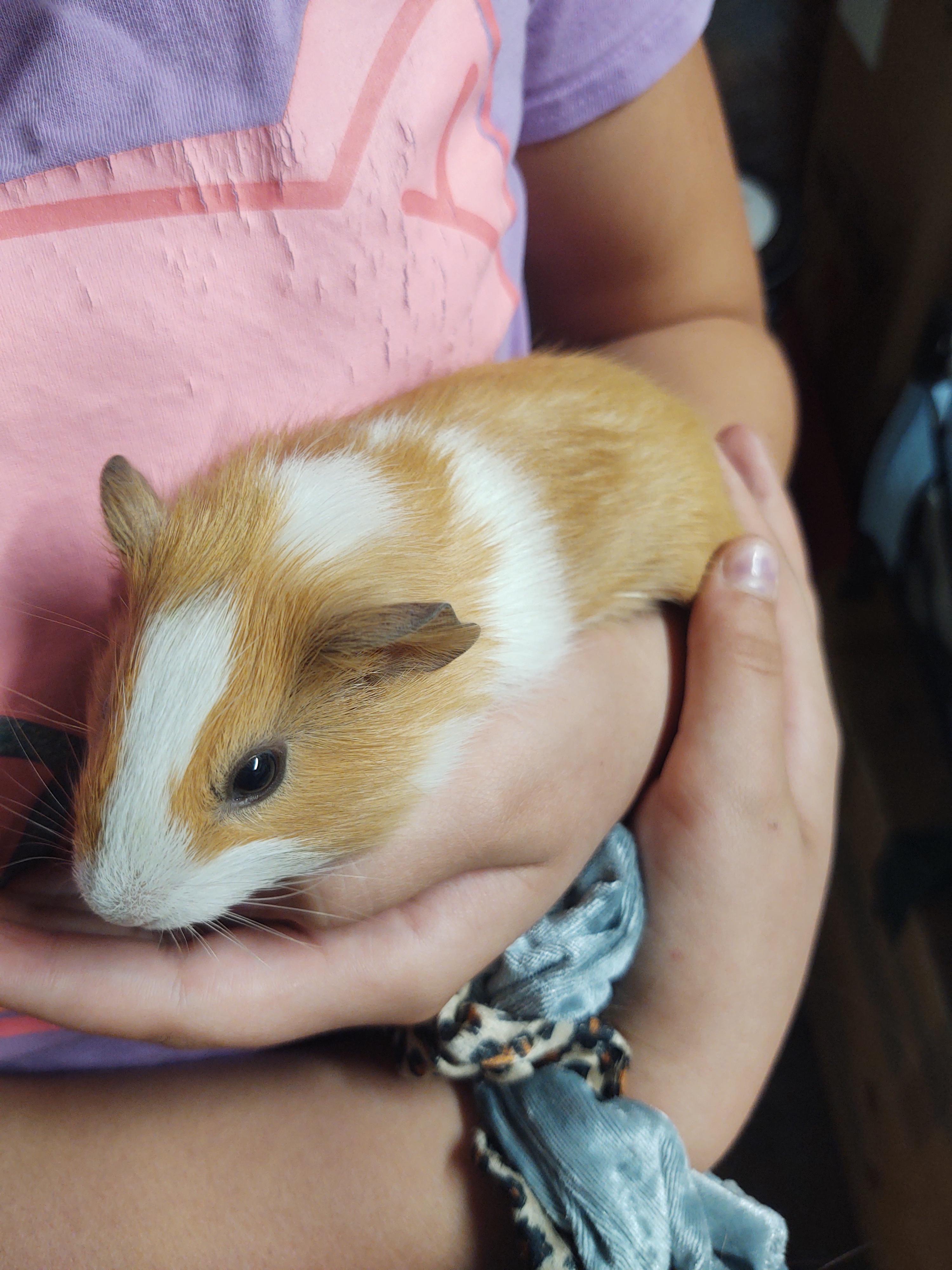 There's one more boy as yet unnamed. I am letting Ella name him since he's her favorite. He looks quite a bit like his brother, except he doesn't have as much white in him. As soon as she decides what to name him, I'll post it here.
Top 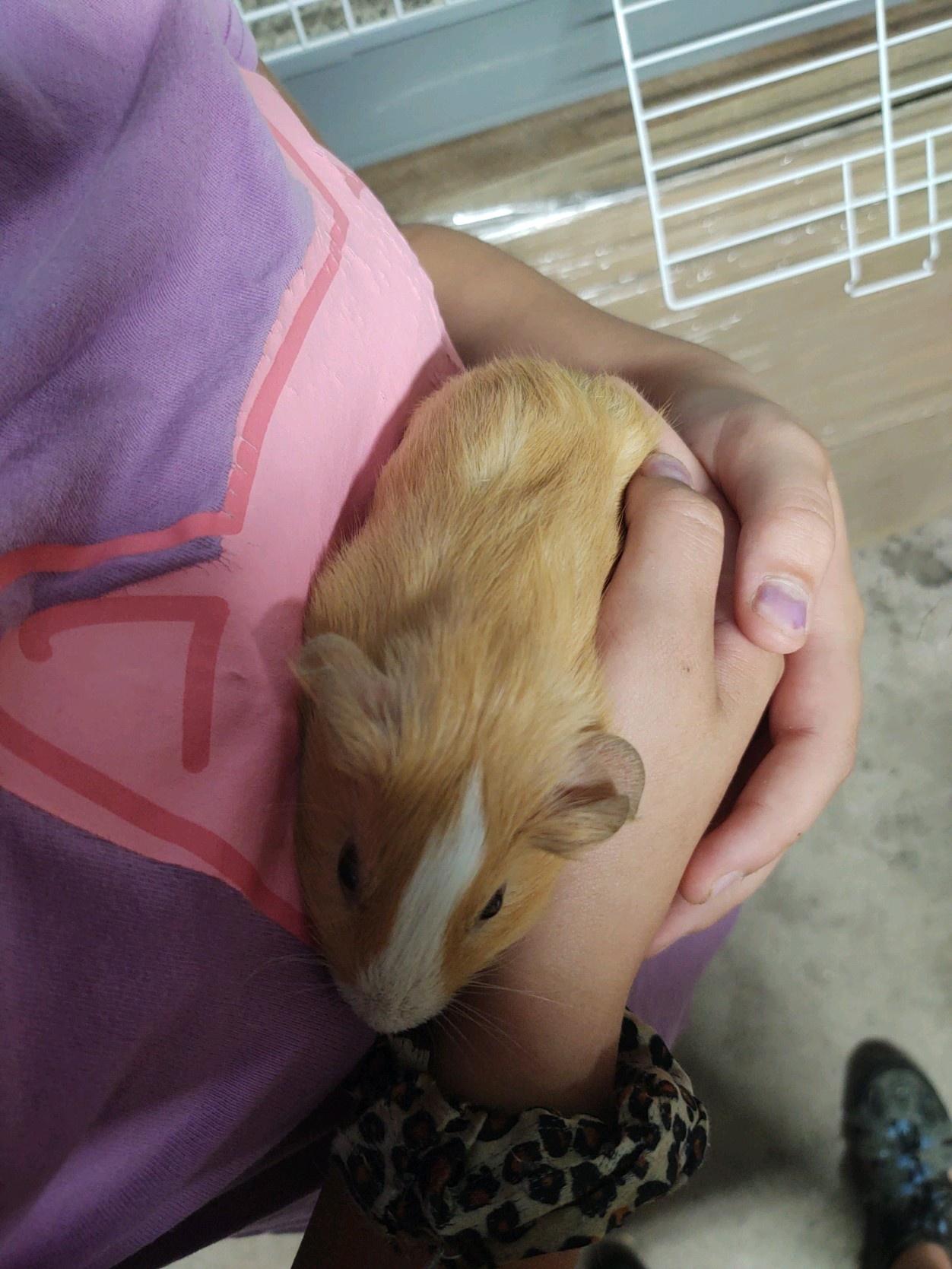 Last boy got his name and it's Jack. I let my granddaughter, Ella name him. I should have known she would choose a Supernatural character to name him after. I guess I should be thankful she didn't choose Castiel lol. Jack goes good with Kahlua, right?

Anyway, Jack is nearly as vocal as Kahlua, only he's much louder. The two of them have been squeaking in protest since I separated them from the girls earlier today. I believe they are trying to call for their mother to come over and rescue them. I'm sure that in a day or two they'll get used to being on their own and settle down. Meanwhile we have been going in and giving them attention periodically throughout the day.

They went right after their veggies, so they aren't on a hunger strike as part of their protest. I haven't noticed that they are drinking much from their water bottle, but I'm too concerned as they get plenty with their veggies.
Top

So cute!! They're still quite small.
Top

I noticed them getting after their mother's hind end quite a bit more when I separated them. Not really trying to mount her but more like a growing interest in her. I was going to wait another week, but with that going on, I felt it was time, so I went ahead and did it before something bad happened.
Top

That’s an adorable little family. So healthy and well cared for.
Top 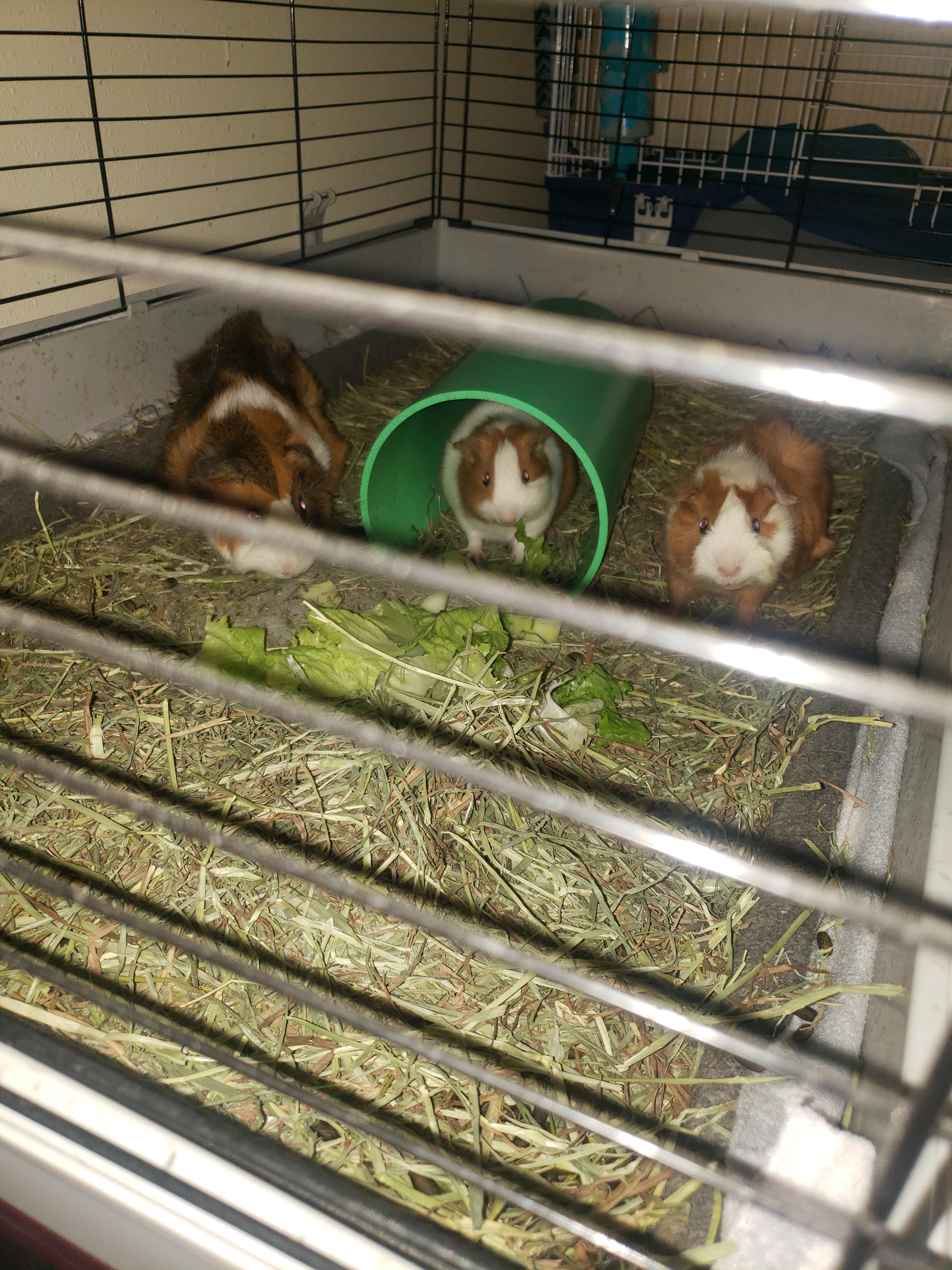 Here they are having their veggies. The little girl in the tunnel is the runt. Her name is Muffin. She is still smaller than her brothers and sister but she's healthy and eats well. She doesn't let anyone bully her from getting her share of the food either. The little Abby is Ruffles. As you can see, Buttercup gets her space when she wants it.
Top

Thanks for posting about them. I'm amazed they're 3 mos. Still cute as buttons. I went back and read your thread about them for info and i was wondering how they're doing. I can see Muffin is small. I don't think "Timid" will catch up with the others, but as you said, so long as the pig is healthy, that's all that matters. I've been told "Timid" is no longer timid.

We're calling them all "she" right now - wishful thinking because we hate to separate them. But if we have males, I hope there are 2 so they can live together. The plan is to adopt some of them out, but that's going to be very hard. I don't think we have room for a permanent third cage and this is an all-female setup.
Top

I got very lucky getting two of each. The boys are Kahlua and Jack. They are getting along famously together. They squeak very loudly at the slightest noise and it echoes through the whole house. Their hearing is very acute because they react to the sound of rattling plastic taking place in the kitchen. They are just now getting to where they'll take food from my hand. It's taking time to earn their trust, but we're getting there.

Picking them up is a different story. I hate having to chase them to pick them up but that too will resolve when they learn to trust me. They'll let me approach them without running and hiding as long as I don't open the cage door.

Kahlua is on top of the house. He has claimed that as his spot. Jack likes to get up there too and they do argue about it, but it's never been serious as of yet. Jack always yields the spot. 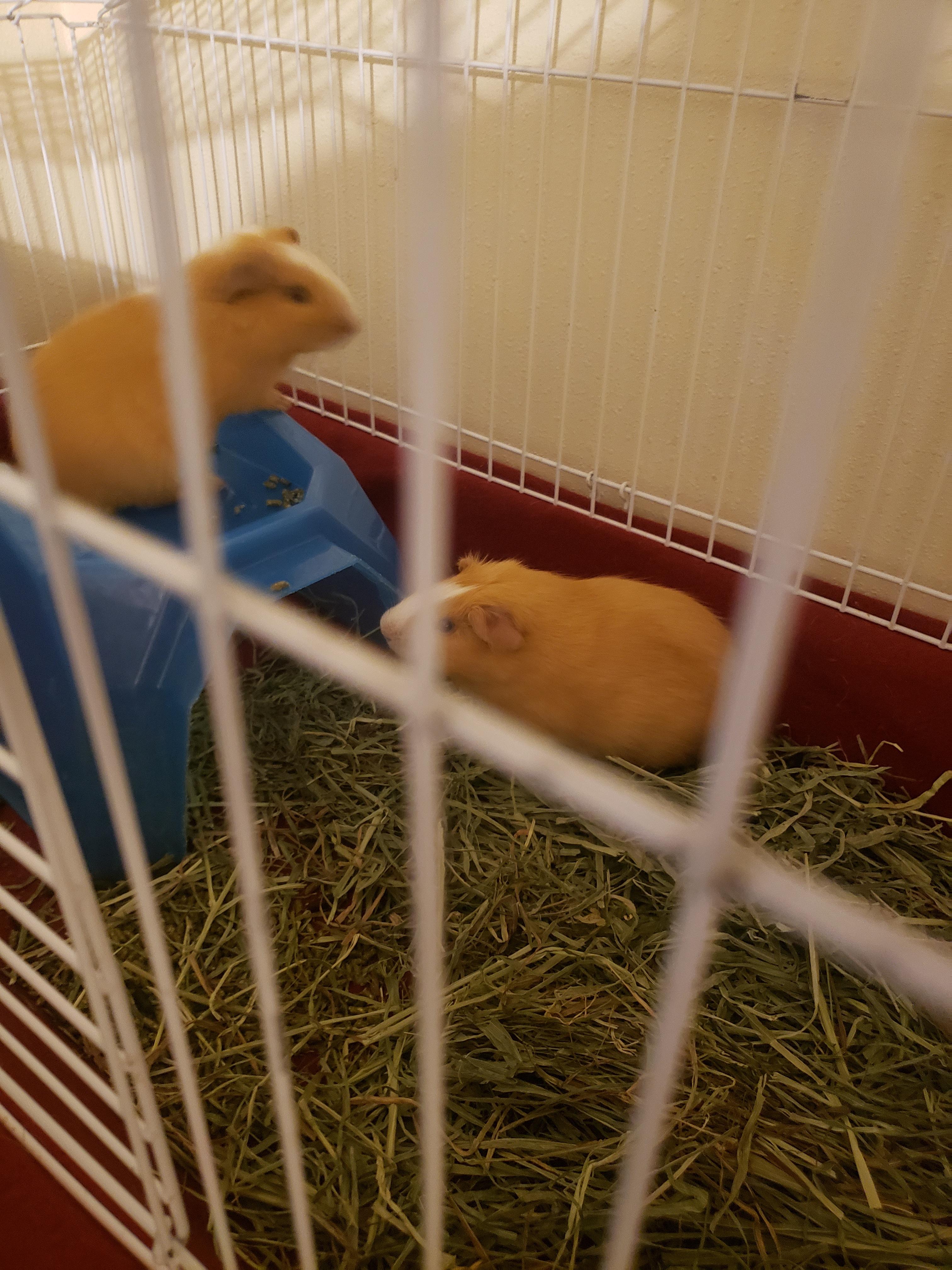 The boys are just too cute. From this angle their coloring looks the same. There's something about gp's getting on top of a house that just makes me laugh.They're either king of the mountain or a scout, but really I think they just think it's fun.

The sound of rattling plastic - oh boy. My childhood pig could hear my mom open the refrigerator door from his cage in the basement and it set off loud wheeks.
Top
Post Reply 60 posts