How well can guinea pigs see? Can they distinguish colors? What does a normal eye look like? Do your guinea pig's eyes have a discharge? Is this normal? 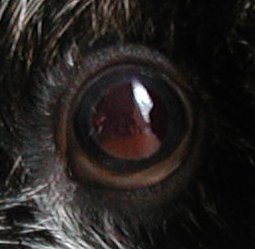 Normal eyes are clear and bright. They protrude slightly and are of the same size. Guinea pigs normally keep their eyes open all the time, even when sleeping. A very few may sleep with their eyes fully closed. While guinea pig vision is relatively poor, a guinea pig can distinguish colors.

Eye Color Guinea pig eyes come in a variety of colors. Breeders identify these colors as dark, dark with a ruby cast, and pink. Dark eyes can be further described as brown, black, or blue. Healthy eyes reflect red in a strong light. This is especially noticeable in ruby pigs, whose dark looking eyes have a pronounced red cast to them, especially noticeable when photographed with a flash. The guinea pigs in the top row have pink and ruby eyes respectively. The eye at the top of the page belongs to the top right guinea pig below and is also ruby. The guinea pigs in the bottom row have dark eyes. 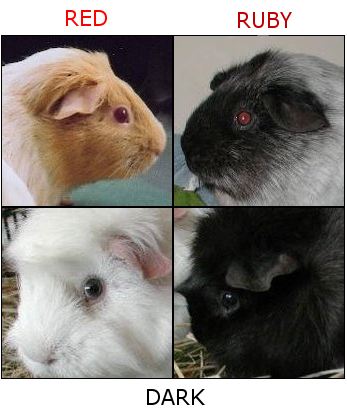 Normal Guinea pigs excrete a milky white liquid which lubricates their eyes and is used to help them clean their faces. After the eye fills up with the white fluid, the guinea pig will then take their front paws and make washing motions. This may happen several times per day although you may never even notice. VC Richardson describes a "milky ocular discharge" as "a normal fluid which is released from the eye as part of the grooming process."

These signs warrant an examination by an experienced veterinarian.

What these signs may mean:

Crusty eyes can be a sign of an upper respiratory tract infection. A guinea pig with a respiratory infection may also have a snotty nose, be lethargic, and may not be eating. Respiratory infections are treated with antibiotics. Read the Dangerous Medications list before you see a vet. IF A RESPIRATORY INFECTION IS SUSPECTED, SEE A VET IMMEDIATELY.

A single watery or cloudy eye may be the result of an injury. Abrasions, cuts, or punctures of the eye can result from accident, hay pokes, or fighting. Examine the eye closely, especially around the rims. Sometimes a bit of hay will work itself up behind the eye and if it's partially visible can be pulled out by tweezers. If the eye shows signs of abrasion or clouds over in any way, or looks red in the white area, or seems to be swollen or sinking or squinting - get your guinea pig to an experienced veterinarian.

Protruding eyes can indicate an abscess, elongated roots, or other problem. An x-ray can often help diagnose these conditions. Conjunctivitis, foreign items stuck behind the eye, dry eye, ulcers, and tumors can be the cause of a swollen eye. Often eye infections or damage will result in a general cloudiness of the entire eye. Watery eyes may be the result of a plugged tear duct.

What the vet will do:

A vet will check the eye for signs of damage or disease. He/she may flush the eye and stain it to look for abrasions or ulceration and then prescribe eye drops like Chloralean or Gentocin. If the eye seems dry, the vet may perform a tear test or send a sample of the fluid to the lab for analysis. Medications like Chloralean can clear up ulcers very quickly. Application of an ophthalmic triple antibiotic eye ointment 2 or 3 times daily may help reduce redness.

EYE PROBLEMS CAN RESULT IN PERMANENT DAMAGE OR EYE LOSS IF NOT TREATED.

Allergies are extremely rare in guinea pigs. Do not make the mistake of diagnosing eye discharge as an "allergy". SEE A VET. Your pet is depending on you!

A cataract is an opacity of the lens the eye. Cataracts can be either inherited or the result of disease or age. Older animals often experience a gradual clouding of the eye. Quick onset is reported to occur in some guinea pigs with diabetes. Read MORE about diabetes.

Cataracts are present in the young of some lines and may develop in early adulthood in related animals. Breeding from these lines is discouraged. Other young may be born with partial cataracts. These animals appear to see adequately. (VC Richardson)

Entropion is the turning in of the eyelashes and irritation of the eye experienced by some newborns. The eye may turn milky white and develop a corneal ulcer. Teddies, Rexes, and Texels tend to be more prone to entropion than other breeds. In most cases pups outgrow this condition after a few weeks. The irritation can be eased by applying a sterile eye lubricant such as Stye several times during the day. Stye is available at most pharmacies near the eye and contact lens products. Ophthalmic BNP is another product that can be applied 3 or 4 times a day. Some pet owners work the lashes out of the eye when applying this ointment.

"I had a pair of Crested Satin sows from a huge inbred colony (started with two pigs living in a chicken coop and turned into more than 30). Depending upon the degree of problem, BNP can and should be applied. Artificial tear ointment at the least to minimize corneal abrasion. One sow corrected herself giving it a couple of weeks and a steroid ophthalmic. The other had bilateral entropion. She had one eye that got better with the steroids and one that required surgery. The procedure went really well.

"It is a painful condition, so pain meds should be considered if it is going to be more than a few weeks to surgery. It is difficult, though since you don't want to give NSAIDS. Sometimes a topical anesthetic preparation (proparacaine) can help. 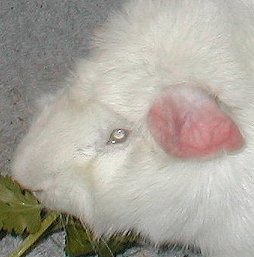 Guinea pigs seem to have poor eyesight to begin with. Some guinea pigs are blind due to age, injury or genetics. A guinea pig born blind may have other genetic defects (see microphthalmia below). Observing your pig's behavior in an unfamiliar environment can help determine if your guinea pig is blind. A blind pig will often startle more easily. A light shown into the eye of a blind pig may reflect white rather than the typical red reflected by a normal eye.

Blindness does not seem to bother most pigs, who readily adapt to loss of sight. Provide your vision impaired pig with a familiar environment so he/she can find food, water, and hay easily. 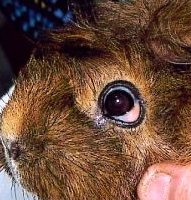 Pea eye (or fatty eye) is a permanent protrusion of the conjunctival sac, thought to be inherited. Pea eye and fatty eye are frequently grouped together by vets as conjunctival swelling. These conjunctival protrusions can be removed by laser if they are interfering with vision. Guinea pigs with pea eye generally do not seem to be uncomfortable and treatment is usually not necessary.

VC Richardson describes a condition she calls 'red eye' that reportedly shows up under stress or in the presence of an irritant like smoke.

In some guinea pigs, pea eye may be caused or aggravated by fluid retention. Not all guinea pigs with heart conditions and pea eye show changes when using lasix but one owner observed that the pea eye always present in her pig with a heart condition (heart disease confirmed at autopsy) became much less noticeable after the animal was given lasix. She also observed a 50% reduction of pea eye for another pig (also with heart disease confirmed at autopsy) after 6 weeks of a low daily dose of Lasix. Her theory is that in some pigs, pea eye may be caused by fluid build-up due to poor circulation. 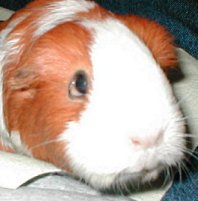 Salana's guinea pig with an inflamed conjunctiva was treated with flurbiprofen, an anti-inflammatory drop, and then gentamicin. The vet reasoned that by reducing the inflammation, the gentamicin could better treat the source of the infection. She found that antibiotic drops alone did not seem effective. The anti-inflammatory/antibiotic combination worked well and cured the problem for about three or four months, until it again returned.

"Cherry eye" in other animals generally refers to a gland located near the base of the 3rd eyelid that is pink in color rather than the normal white conjunctival color. Josephine notes that there is no evidence of a guinea pig having a 3rd eyelid.

In a guinea pig, it is instead a lacrimal (tear producing) gland made up of lymphatic tissue and it is this gland which becomes infected and/or inflamed in cherry eye and prolapses. Cherry eye in dogs is considered uncomfortable, especially when the condition is more severe and covers more of the eye. In contrast, pea eye is usually not painful or uncomfortable.

Microphthalmia is a congenital condition where the eye is either very small or non-existent, rendering the guinea pig blind.

Lethals can be affectionate pets. They require extra medical care and may require hand feeding. Lethals tend to live shorter lives, depending each pig's particular genetic problems. Einstein (a lethal) stands to the left of Doom, a roan. 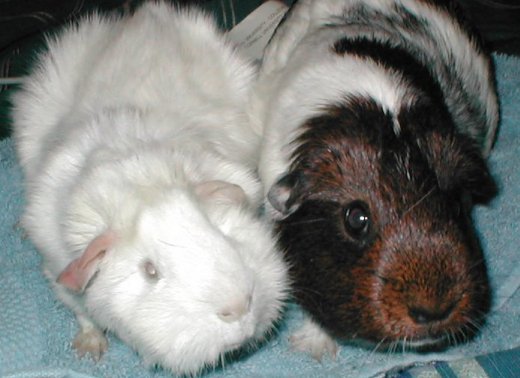 Every roan pig has one copy of the roan version of the gene, and one copy of the normal version. Since it's random which copy of the gene they pass on to each baby, there's a 25% chance of getting roan from mom and from dad--this makes a "lethal". The normal version of the gene is necessary for prenatal development of nerves, coat colors, and teeth, so babies with no normal copies don't have their eyes, ears, teeth, and sometimes internal organs develop properly. These pigs can die before birth, shortly after birth, at weaning (if not properly identified and treated), or as adults. Usually lethals have shorter lives than normal pigs.

Einstein, for example, is the baby of a pig I bought in a pet store. He had to have his first tooth trim at 3 weeks of age, and has had to go to the vet once or twice a month his entire life. He's blind, deaf, and has no front teeth. His back teeth grow in wrong, causing lots of pain and injuries to the insides of his cheeks. Because of his tooth problems, he has to eat soft food all the time, and since he can't eat it efficiently, he's a runt, much smaller than his mother and brother....he died at 2 and a half years old, because the lining of his small intestine wore away. He had to have his molars trimmed at least 30 times in his life.

Photographs on this page thanks to Pinta, Amanda Jenkins, and Salana.