Does anyone check on guinea pigs in rescue?

I didn't see a thread on this, so if there is one and I missed it, please forgive me.

The reason for this thread is because today, I went to the Nevada Humane Society to see if they had any guinea pigs and if so to visit with them. I do that from time to time if for no other reason than curiosity. What I saw was a bit of inexperienced care. Don't get me wrong here; they do their absolute best to care for every animal. One of the cages had the same sugary Wild Harvest pellets that almost killed Scruffy. Luckily, it was an empty cage. When I pointed it out, the technician said that most of the small animal food is donated. I might have to donate some good guinea pig pellets.

There were 4 little girls in pairs of two and a single boar. Two of the girls were in really good shape. Both pretty vibrant and the one named Foxy was doing zoomies and popcorning in an obvious effort to sell herself. What a ham!! I felt for her, but not only can I take on more than the 4 I have, I can't flirt with disaster by getting sows because I do have the 4 boars. Anyway, her partner was enjoying some relaxation and a snack in the hay. The lone boar hid in his house and refused to come out. He was pretty small, so I doubt he was more than a couple of months old and probably scared out of his wits.

In the other cage, one of the girls, who is named Shortcake came up to the side of the cage to sniff my hand. Obviously, she is used to people and not the least bit apprehensive. Her partner, Strawberry was a different story. She didn't move at all and her breathing was extremely labored. She a bit smaller than her partner and when Shortcake climbed over her to get some hay, she barely moved. My first thought was a URI. Every time she breathed in, you could see her sides suck way in. She raised up slightly with each breath like it was uncomfortable.

I called the technician in and showed her. She was a dog expert and had no idea what to do for a guinea pig so she called another guy in to look at Strawberry. He knew a little more; enough to pick her up and listen for wheezing. She had enough of one for him to hear, so he wrote up a referral to the vet. Unfortunately, she might not get to see one until tomorrow at the soonest. Sometimes the vet gets Saturday off, so if tomorrow is one of those times, she'll have to wait until Monday. I stressed to him the urgency of the problem and that she can't wait much longer before she's in real trouble.

That was the second time I have noticed a piggie in distress; the first being at PetSmart. So I'm just wondering if any of you ever check on the piggies in rescue or pet stores. I felt so bad for Strawberry that I was tempted to adopt her and Shortcake (since they're a pair) and take her to the vet myself. Of course, having 4 boars, that wasn't a good idea, so I'll keep checking on her and make sure she gets medical attention.
Top

I think it's great that you do this. It might inspire a few other people to put this on their list of things to do.
Top

I'm always wishing I can adopt every guinea pig I see there just because I feel bad for them, but I know that's really not feasible. Since I can't do that, I do the next best thing and check on them often. That goes for the pet stores too. Whenever I notice a problem, I bring it to someone's attention. I was wondering if anyone else does it too. Tomorrow, I'm going to the feed store and getting 10 lbs of the good guinea pig pellets to donate to the Humane Society. At 60¢ a pound, it's not a big deal but it makes a lot of difference to those little ones in guinea pig jail. If I can't spring them, I can at least make sure they're fed properly. I might donate one of the four 50 lb bales of timothy hay i got from Illinois too.
Top

I'm fortunate that the one and only guinea pig rescue in my area does an exemplary job of taking care of the guinea pigs.
Top

Could you maybe foster for the Humane Society?
Top

I wish I could. We're space challenged with 4 of our own guinea pigs. 3 of the 4 foot by 2 foot cages I have for them takes up most of the space I have. I have to build a platform so that I can stack 2 of them without putting the weight of the top cage on the bottom one. The third one is nearby on the dresser. I couldn't imagine where I would keep them.
Top

I think educating rescues and shelters is a HUGE contribution. Have you thought about printing out the GL Care Guide and handing it out? I used to provide copies to our local pet store.
Top

I just might do that. I didn't get to go see Strawberry today because spring cleaning to get my boys set up took all day and by the time I finally got done, the feed store and Humane Society were closed. I should be able to take care of it tomorrow. Lucky, both are open on Sunday.
Top

There are various formats of the Care pamphlet and info cards:
http://www.guinealynx.info/pamphlet.html
Top 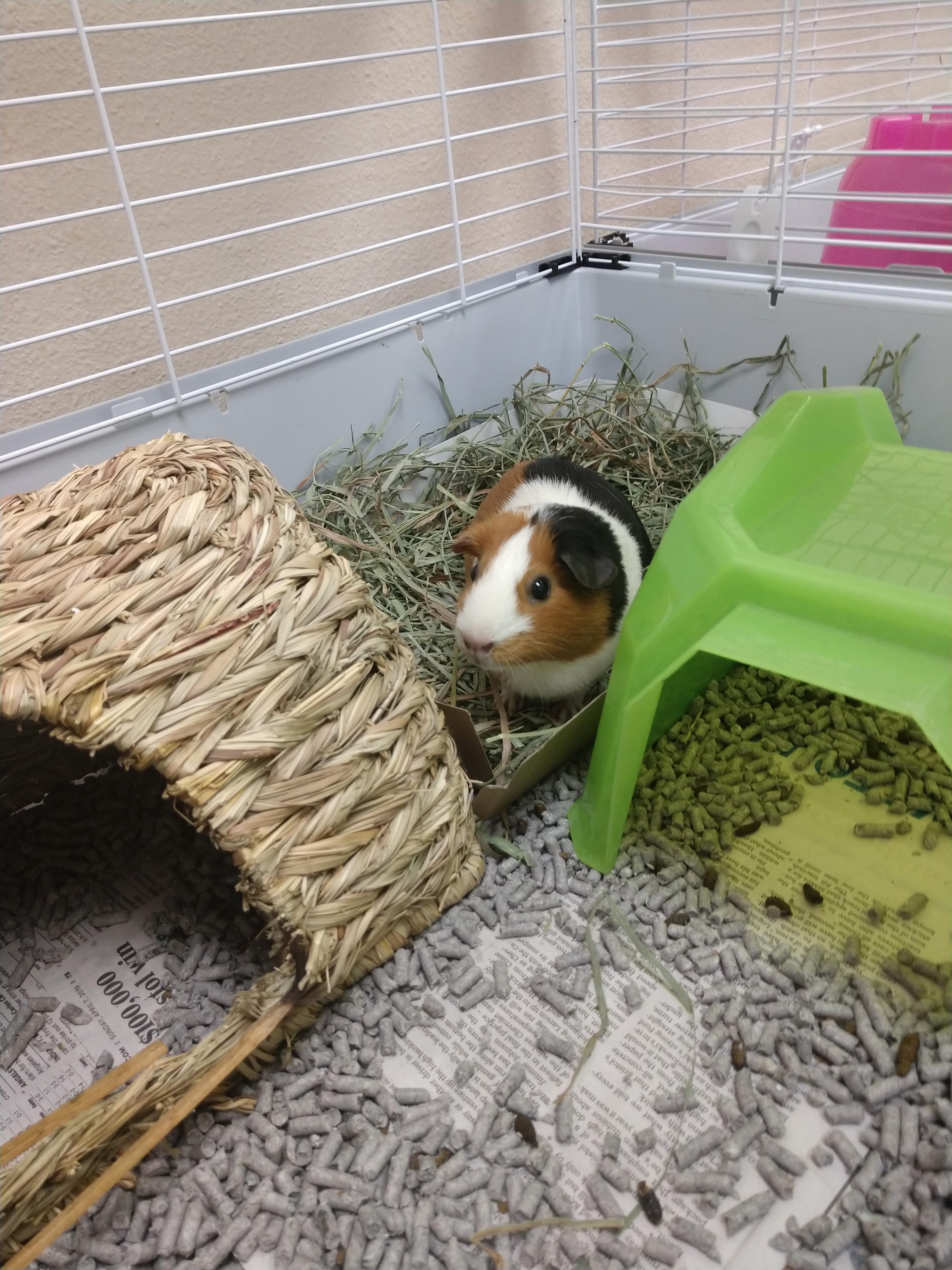 Strawberry is too cute to be in rescue

So I took 10 lbs of pellets to the Humane Society and checked on Strawberry today. She looks better, but still having a little bit of labored breathing. I took a video of it. We were wondering if she might be pregnant with the way her sides move when she breathes. She did see a vet yesterday, but they didn't have any notes on what they found. The technician promised me that he would keep an eye on her. I'm still going to go see her every couple of days because he's got a lot of animals to take care of.
Top

Oh, what a sweet little thing. Not great that they're using newspaper for bedding. :( (Are those food pellets all over the floor of her cage?)
Top

I think those are a bedding pellet. I've seen them in rabbit cages before.
Top

Yes, rabbit bedding pellets with newspaper underneath. It's the Humane Society. They have a tiny budget in this state and rely heavily on donations. The Abby named Foxy in the next cage was eating the newspaper. I saw bits of wilted parsley on the floor. I went back and gave them a 50lb bale of timothy hay I brought back from Illinois. I had 4 of them. Since one bale can last for a few months, I could spare one. The rabbits eat it too, so it'll go quickly. There's a dozen or so rabbits there. That makes me wonder why people get these small animals if they just wind up being sent to the Humane Society. I might start buying a bale of the orchard hay every month along with the pellets to donate. If I can't take them in, I can at least help.
Top

That is indeed an adorable guinea pig! I hope she finds a good home and lives a long, healthy life.

I do hope she is not pregnant.

Do you live close by?
Top 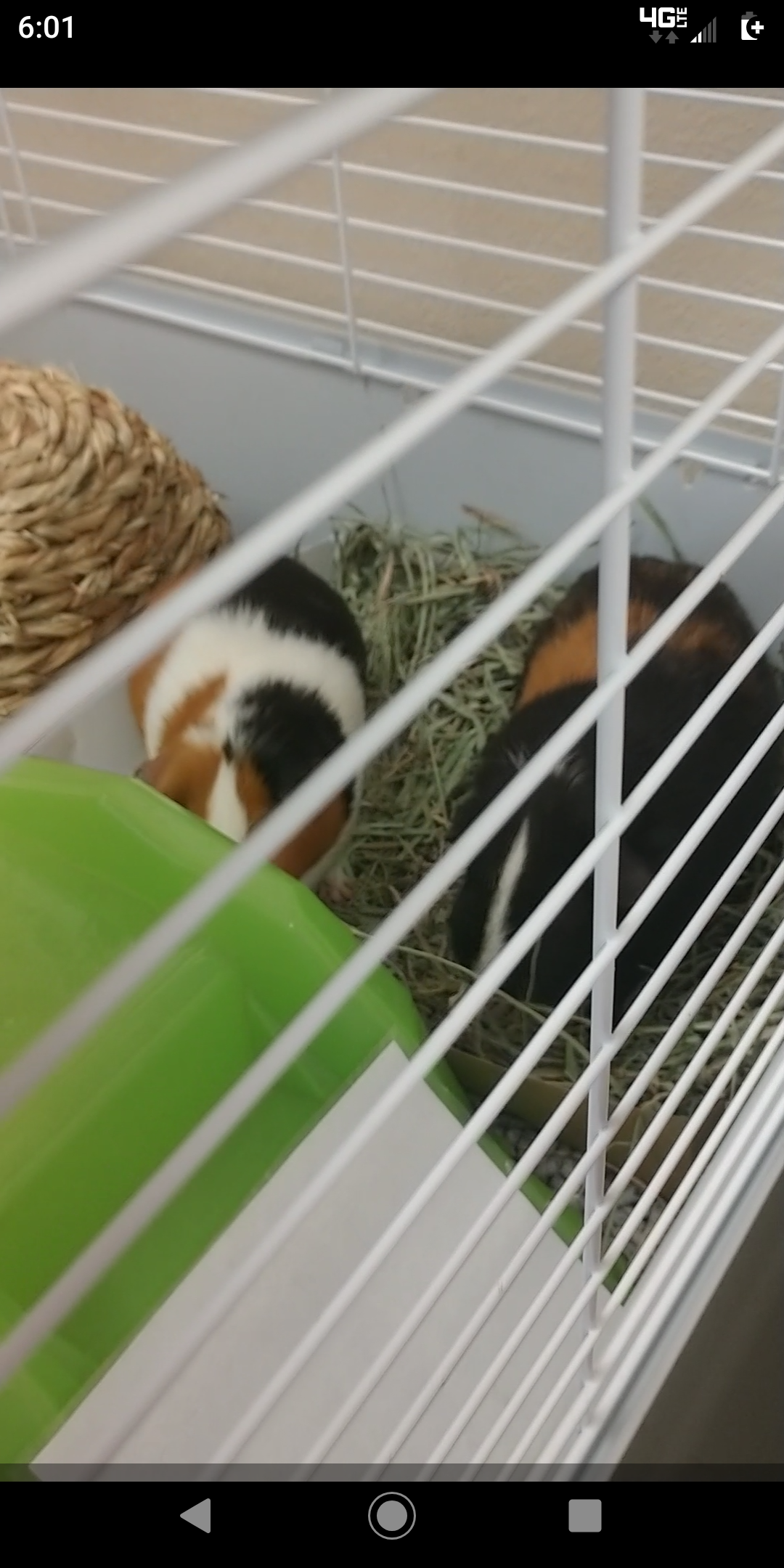 Here's Shortcake with Strawberry. Look at how much bigger she is! She's as big as my boar, Mr Bubbles!

I live less than a mile from the Humane Society.
Top

For me, that would be a 15 minute walk! I would be tempted to stop by often.
Top

I stop by every couple of weeks or so. They didn't have any guinea pigs last time. Then last week they got 4 sows and the boar. The little guy got adopted, hopefully by someone who'll give him a good home. I might slip by again tomorrow and make sure Shortcake is indeed a sow and not a boar. The Humane Society is pretty good about getting the gender right, but I should make sure.
Top

Went to check on Strawberry and Shortcake and they're gone. Nobody could tell me what happened to them, but since both of them are gone, it's safe to assume that they've been adopted. Hopefully by a good family. Their Abby neighbor girls, Foxy and Banana are still there and both appear to be happy and in good shape. They actually came up to the side of the cage to sniff my hand and nibble it.
Top

I hope they found a good home too!
Top
Post Reply 72 posts