Does anyone check on guinea pigs in rescue?

She is really cute! It must be difficult meeting these adorable guinea pigs!
Top

I try to avoid going to pet stores or rescues/shelters as I know I would want to take all of them home .
Top

It is difficult, but I appease myself by visiting them regularly and donating things for them.
Top

Checked on the rescue piggies today and left there a bit sad. There is a pair of male Abbys in one cage. They aren't too skittish but they don't come up to my hand. They perk up though, so that's good. Another cage has a small male Dark eyed white. Judging by his size, he can't be more than a couple of months old. He runs around and will briefly sniff my hand, but not much more than that. The 3 young females are still there in the one cage. One of them is a DEW. None of them seemed even remotely interested in me or sniffing my hand. I'll bet a carrot would change that.

The last cage is the one that made me sad. There is an Abby who is about the same size as Scruffy was. It said on the paperwork that the poor dear had a possible mass of some sort that ruptured on its behind. They haven't sexed it yet, but it looked to me as if it is a female. It was hard to tell from the look I got at it. It was somewhat lethargic, but did perk up slightly when I talked to it. Treatment is underway, but it needs a lot of love and attention. No age is listed, but I'm guessing 1-2 years old.

I'm going back to sneak some treats to all of them. I'll do my best to get some good pictures of them.
Top

Went by to give treats to the rescue piggies today, but I wasn't able to get pictures. I brought those really thin baby carrots. The 3 young girls were all adopted together by a family. Only the boys and the sick one are left. The two big Abbys were very receptive to the carrot sticks and took them right out of my hand. One of them even licked my finger and purred.

The little DEW was apprehensive at first and would not take the carrot from my hand. I dropped it so he could get it. After he ate that one, he took the second one from my hand. The sick one still doesn't have the sex listed, but my guess is female. She (?) is lethargic and the way she sits makes it hard to see her hind end. She wouldn't move, much less come over to get the carrots, so I opened the cage door just enough to slip them to her. I was able to get them right under her mouth so she didn't have to get up to eat them. I imagine with her wound that getting up and moving is painful. I was glad to see her eat the carrots.
Top

They are doing everything they can for that guinea pig. I think the lethargy is because of a combination of the medications she's on and being in a strange place. She's not totally lethargic but clearly not as active as she should be.

The staff member who processed my adoption for Barry Jenkins said that she was surrendered because the previous owner didn't have the means to get her the medical attention she needs. That would explain why the mass on her behind was left to rupture. I'll never get people who do that. If you can't take care of a Guinea Pig; including the potential vet bills, then don't have them.

I'm going to take a personal interest in this guinea pig and show her the love and attention she needs in the hopes that I can help her make a full recovery. There's no way I can adopt her, but there is plenty I can do. I can give her treats every day and hopefully she'll wind up in a great home. She's such a beautiful girl. I'll get a picture of her and post it.
Top 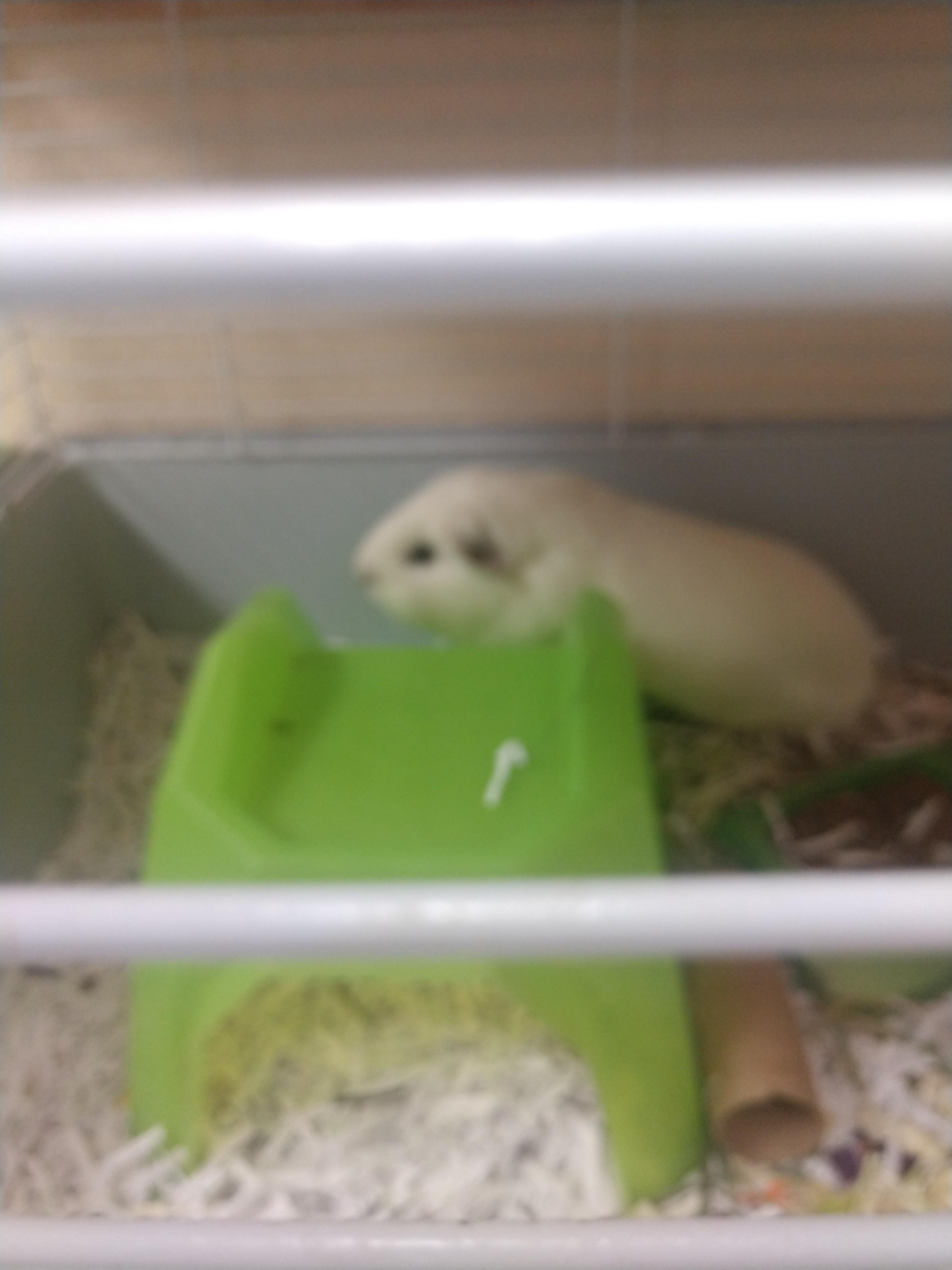 This is Boogie. It's very hard to get a good picture of him since he's a zoomie little guy. I did get him to take carrots from me, but he was too fast to get a photo of it. I had to rattle the plastic to get him to stop barely long enough for this picture. 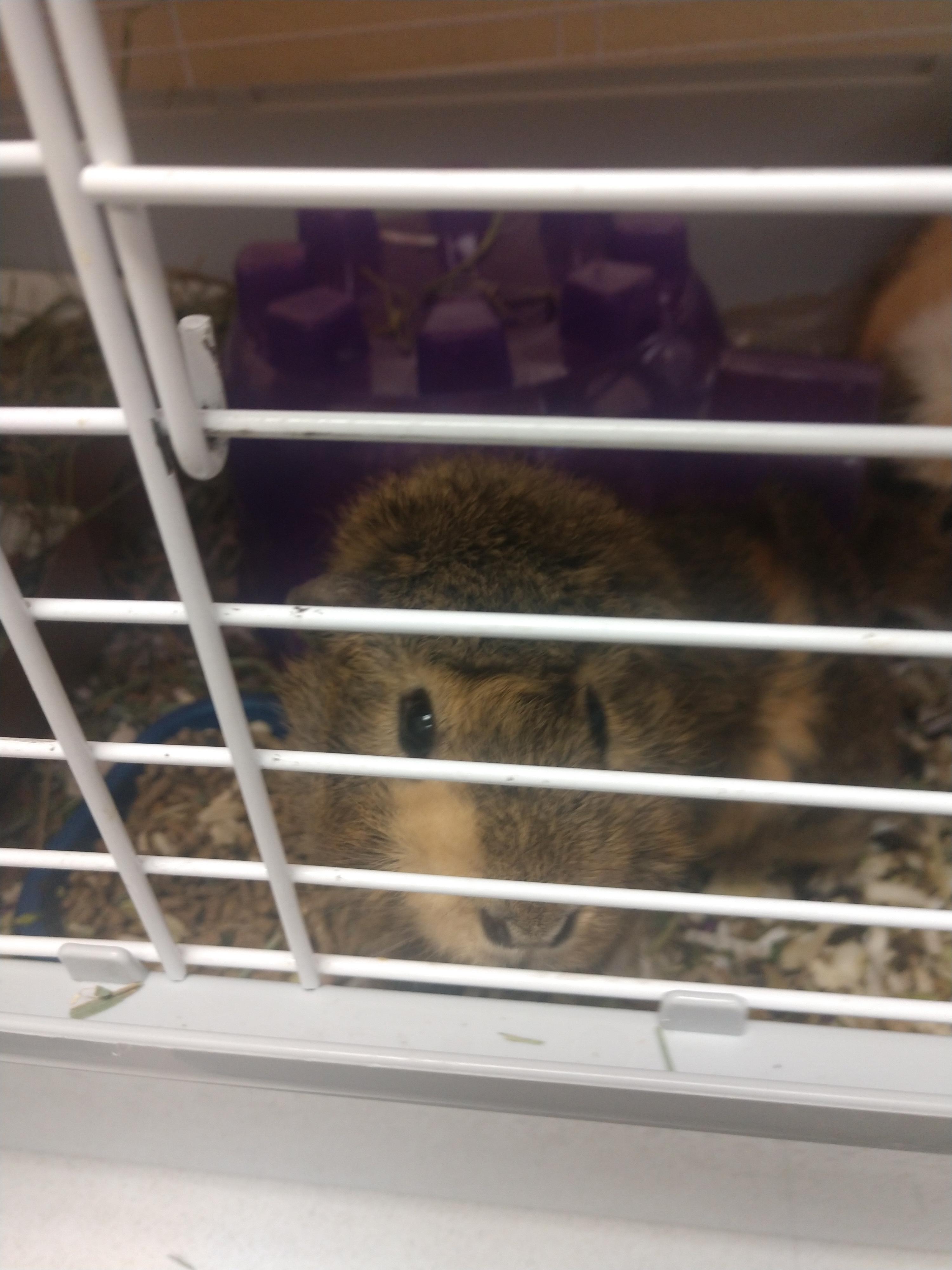 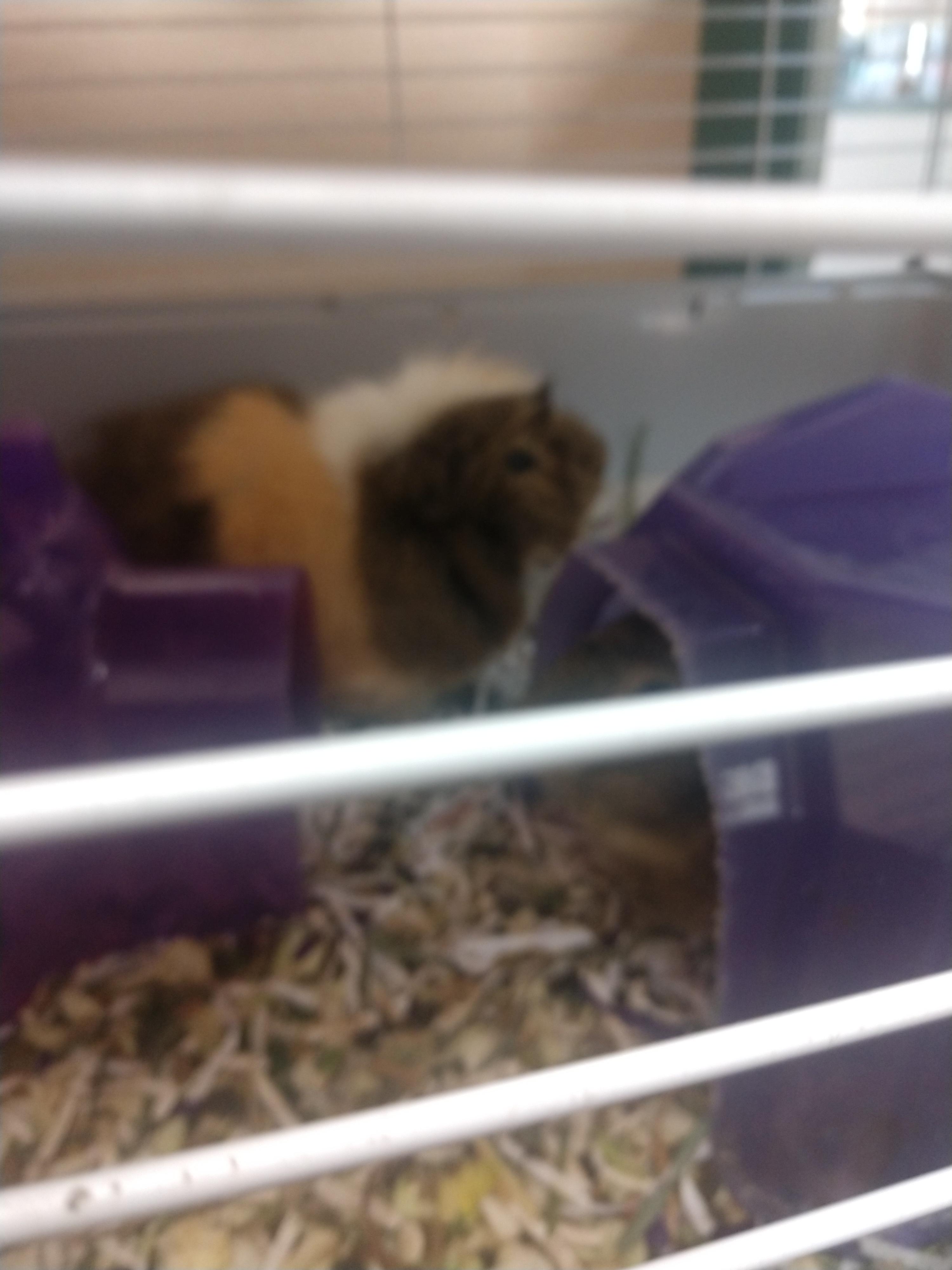 Groundhog. He's more trusting than Wombat. I didn't need a carrot to get him to come over and sniff my hand but he got one anyway.
Top 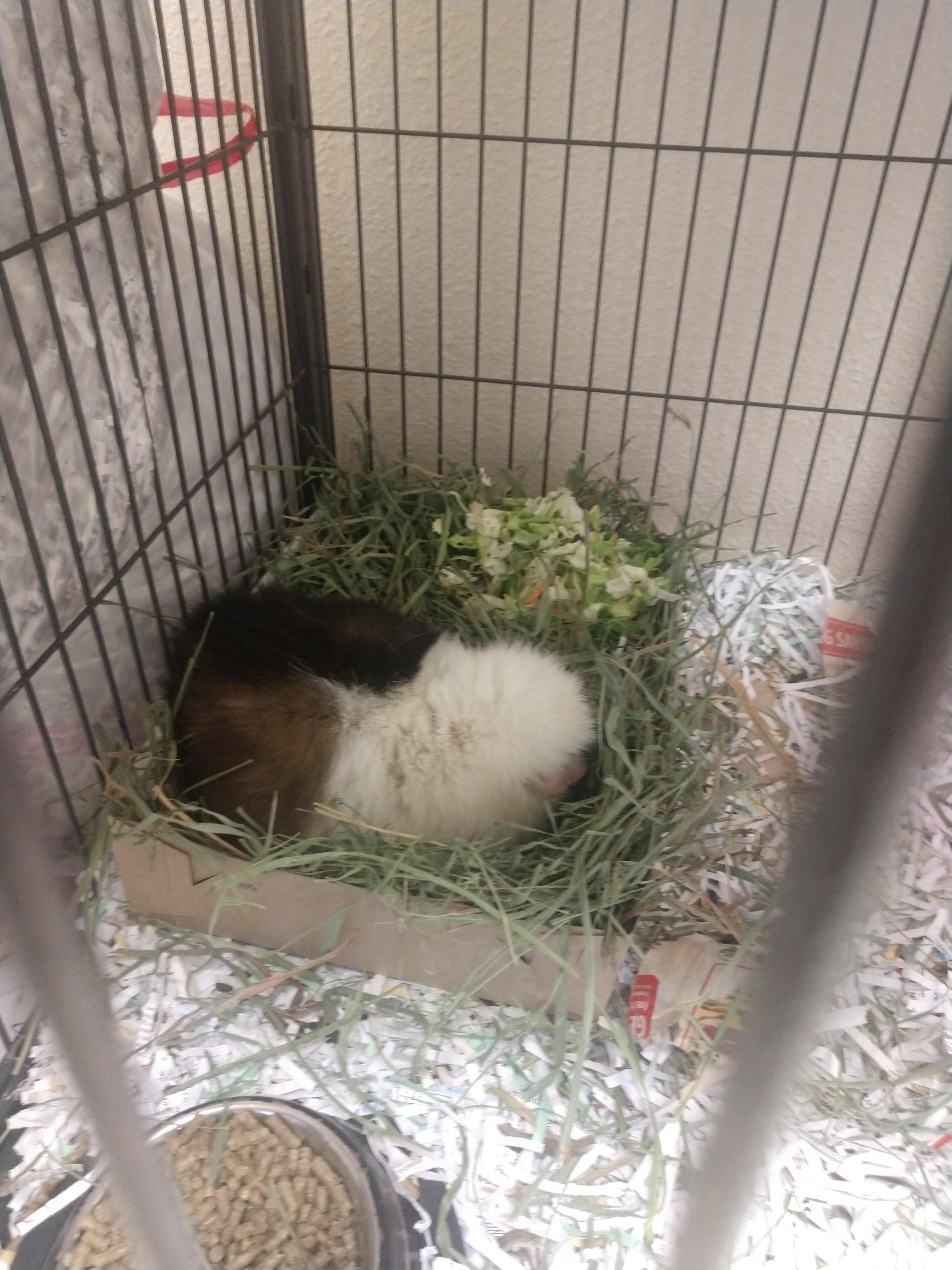 This is the sick guinea pig. Still no sex listed, but there is a name and it's Goosebump. I'm starting to think that he's male with that name, but you never know by their names. My male was named Bubbles. Goosebump barely lifted up his or her head today. I spoke with the desk and they said a recheck was done on Monday, 2 days ago. It doesn't look like Goosebump is eating much. Not seeing many droppings either. The same veggies that were in there yesterday are still there.

I asked about handfeeding and they didn't know if that was prescribed or if it is being done. I would like to think that they are tracking weight and will notice any weight loss. Bactrim is being given to Goosebump, so hopefully a probiotic is too. I dropped off hay and lettuce for them too, although it'll probably go mostly to the dozen or so rabbits they have there. I'm hopeful that this guinea pig will feel better and be more active tomorrow.
Top

I meant to post this last week, but I think Goosebump might have passed away. He was pretty sick and he's gone from the humane society. Of course they won't say he died, but his condition, the fact that there is no way he got well enough to be adopted in the time since I last saw him and the time I discovered that he was gone (2 days) and the fact that the staff won't say it, that tells me he didn't make it. I've asked about the guinea pigs before and they will tell me if one was adopted, just not who adopted them.

I'm both saddened that the poor guy suffered and died and I'm mad as hell at people who get these wonderful animals as pets without knowing what they are getting into and not caring enough about them to get them the medical attention they need and then dumping them after it's too late to save their lives.

There's no reason why this should have happened to Goosebump. If they would have let me, I would have taken him in and made sure he got the best medical care possible. Even if I couldn't have saved him, he would at least have known that there is someone who loved him and he would have passed away in a pair of loving arms instead of alone in a cold heartless cage. Things like this make it very hard to go and see these guinea pigs, but it's something I should keep doing. There are no more guinea pigs at the shelter for now but I'll keep checking. I need some time to get over this anyway.
Top

I'm sorry to hear about Goosebump. I wish they would be more forthcoming with you.
Top

That's sad. It's frustrating when there's a sick pig you want to help and you can't. Too bad the rescue won't do fosters. Maybe there's some sort of liability for them?
Top
Post Reply 72 posts