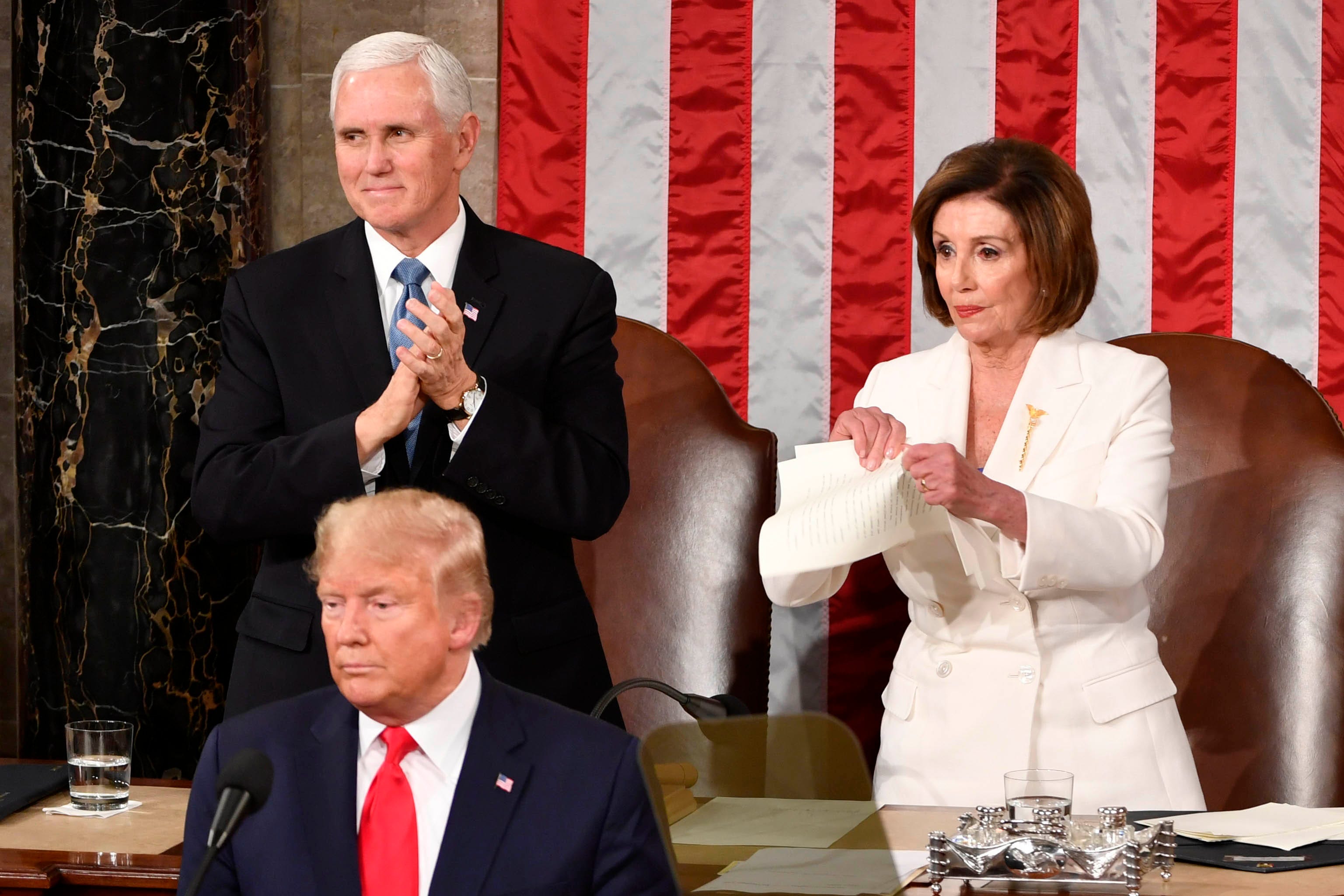 I know what you mean Sef but this is what I hate about 2 parties, 2 jackasses don't make a right.

He's a child brat and more, now she's going lower to meet him. Isn't he bad enough? At the highest level of our Government; having him, his hair, and everything else is bad enough, now she is doing childish things behind his back?
Top

I love Nancy Pelosi! A subtle (or not so subtle) method of opening up conversation on the differences between the parties. All the falsehoods and crap from his state of the union speech could be highlighted by her explaining her actions.
Top

To me, that shows the parties are exactly the same.
Top

She was making a bold statement: enough of your damned lies. Good for her. Read:
https://www.factcheck.org/2020/02/factchecking-the-state-of-the-union-3/

I'm sick of leadership on both sides just silently sitting back and not calling Trump on his bullshit. Nobody has any courage integrity left. Perhaps if more people had stood up to him and exposed this vile piece of crap for what he was early on, we wouldn't be in this mess now.
Top

Calling the parties exactly the same?

I don't think so.

I do think many in the Democratic party are calling him out. The issue is whether or not the media lets us know.
Top

Ditto. Love Nancy Pelosi. I think (hope) media is gradually giving up "balanced coverage". That's a total farce when we've got a tyrant at the helm.

"Perhaps if more people had stood up to him and exposed this vile piece of crap for what he was early on, we wouldn't be in this mess now." I sorta doubt it. The people who need(ed) to and are standing up are the "elite", i.e. the well-educated & experienced. MAGA folks don't believe them and disdain them.

Again, I think this is more media's fault than anyone else's.
Top

FoxNoise in particular, but other media like CNN legitimized Trump early in his campaign, and I will forever hold them in large part to blame them for what we have in the White House.
Top

Exactly. If mainstream media (forget Fox) had reported on him clearly early on, we may have avoided this awful mess.
Top

Both parties the same, GPIG? Really?

1) The Republican tax cut, that gave 90+ percent of the money to the top .5% of Americans.
2) The failure of the Republican controlled Senate to pass any bill to provide for election security, even when every intelligence agency we have says the Russians are hell-bent on meddling in our elections.
3) tRump's rollback of more than 50 environmental protection policies.
4) Republican support for "net neutrality," which is just a license for telecom/cable companies to line their pockets and screw the public.
5) The consistent, sustained Republican effort to deny medical care and all other support services to poor people.
6) The separation of babies from parents at the border. And before you tell me that Obama did the same thing, let me point out that his policy only applied when the children were not with their parents and were possibly in danger from the adults they were with.
7) tRump's attempts to block the people of entire nations from entering this country legally. For example, blocking Muslims from many nations but NOT from Saudi Arabia, the country behind the 911 attacks. Oh, of course, tRump owns properties there.
8) tRump's Twitter feed
9) McConnell's blocking of any vote on the Merrick Garland nomination.
10) McConnell's refusal to allow a vote on ANY of the more than 400 bills that the House of Representatives have sent to the Senate in the last year and a half.

I could go on, but you get the idea. Show me where the Democrats have done ANY of those things.

I’m no supporter of Trump or the Republicans, but I’m with GPIG on this one. I’m not willing to give the Democrats a pass just because they are not Republicans. Bill Clinton deported more immigrants than any president in U.S. history — 1.8 million during his last year in office alone. Obama deported hundreds of thousands under the harsher form of deportation known as “removal,” which makes returning to the U.S. a felony. Clinton ended the welfare program. I doubt a Republican could have gotten away with that politically. The Anti-terrorism and Effective Death Penalty Act of 1996 -- passed with bipartisan support and signed by Clinton -- reduced democratic rights and expanded the use of the death penalty. Obamacare increased the profits of insurance and drug companies more so than providing access to affordable health care to most Americans. The numerous wars and invasion have been the product of Democrats and Republicans alike. Many if not most of the wars and invasions of the last century were entered into by Democrats. And it was a Democratic president who dropped not one, but two atomic bombs on civilian populations. Obama expanded the use of drone assassinations including on a US citizen. So much for the presumption of innocence and due process. I could go on. None of this is okay with me just because they were done by Democrats. Both parties are the devil as far as I am concerned.
Top

There are different ways to look at this, but I think right now I'm most focused on the huge disparity between the two parties re. wealth vs. poverty. And the flagrant lack of empathy on the part of the R's. And of the double standard that's been going on since Nixon or Reagan in which the Repub. can use all sorts of dirty tricks & unfairness, like McConnell & the Merrick Garland nomination, with impunity. If the Dems. did any of that there'd be a huge outcry of indignation on the part of the Reps. & they'd use it in any way they could to punish the Dems. The long, drawn out investigation of Ben Ghazi long after there had been shown to be no wrong doing is another example. Ditto Hilary's emails. On and on. Can't think of instances of Dems getting involved in stuff like that.

So that's my beef. My opinion only.
Top

There may be various policies under one or more Democratic Presidents that you don't agree with, and that's fine, but you can hardly call the Democratic party "the devil."
Top

The EPA was started by Nixon
Top

GPIG, I didn't state that Democrats started the EPA; I stated that the Dems had given us environmental laws and regulations. This includes improved fuel efficiency standards, regulations on carbon dioxide emissions from coal plants, "Green New Deal," etc.---things that the Republicans, have actively tried to roll back in recent years:

"Since Trump’s election, Democrats across Congress have voted for pro-environment legislation 92 percent of the time on average, compared with 5 percent for Republicans, according to an analysis by League of Conservation Voters." [source: Lawmakers’ Political Divide Over Climate Change Has Grown in the Trump Era]
Top

I’d give the labor and civil rights movements credit for most of the things you listed above Sef, not either the Democrats or Republicans. There were massive labor strikes and street demonstrations in the ’30s and a massive civil rights movement culminating in the ’50s and ’60s. I don’t think politicians like Lyndon Johnson suddenly became progressive. They were forced to do something to deal with widespread protests and discontent.

It is also my opinion that mass movements are what we need to see further change. I don’t see anything coming from the Democrats or Republicans unless they are forced to. The Democrats may give more lip service to workers as the Republicans do to big business, but most things are done on a bi-partisan basis.
Top

If nothing much is coming from the Democrats these days, it's in large part because policy-making is hitting a brick wall in the Senate:

"As of November 15, 2019, the House has passed nearly 400 bills, not including resolutions. But the House Democratic Policy and Communications Committee estimates 80 percent of those bill have hit a snag in the Senate...[O]n major policy issues — like health care and infrastructure, or even bipartisan ones like net neutrality, the Equal Pay Act, or even a simple reauthorization of the longstanding Violence Against Women Act — Democrats’ bills are continuing to languish in the Senate."
https://www.vox.com/2019/11/29/20977735/how-many-bills-passed-house-democrats-trump
Top

It is unconscionable what Moscow Mitch is doing! Some of those bills would doubtlessly pass with bipartisan support.
Top
Post Reply 57 posts