I love that cage, there's something for every piggy mood.

It sounds like Scribble is the living proof that a boarly boar doesn't change when he's neutered! Does he get peed on much?
Top

Lovely set-up and must be great fun for the pigs. I always admire those with 2nd level areas for their pigs, as I worry that it will be difficult to clean the underneath area. Better not show the photos to my girls as they'll be lining-up to move over, or writing a petition for a cage change as well.
Top

I adore your cages! And Scribble is officially on the pignap list.
Top

aww Scribble and his Chewie face <3 Can't believe how big your babies have grown!
Top

Brainerror - I know! I expected Scribble to grow bigger but Meribel has completely dwarfed Annie (the pig who we thought she would stay the same size/weight as). They grow up so fast, can you believe that Scribble is now a year old!?

GP_mum - I use to have a cage where the 2nd level overlapped 4 of the upper level grids. I found it SO hard to clean so I have since stuck with cages I can stand in when cleaning with bridges which don't expand beyond 1-grid in depth so you can reach all the bits!

Clairey - he does get pee'd at quite often but he's become very good at avoiding the punnishment and instead just goes off to bother Buddy. :(
Top

I still can't believe Nibbler is 4, Squee will be 5 and Chubbles will be 7 in June O.o
Top

Poor Buddy. Hormonal teen boars are such a pain, especially for the older gentlepig who just wants a quiet life.
Top

They grow up too quickly! :)

Meribel has a complaint about veggie time. It did take her a while to notice but she believes that something (besides additional mass) is missing from this salad. 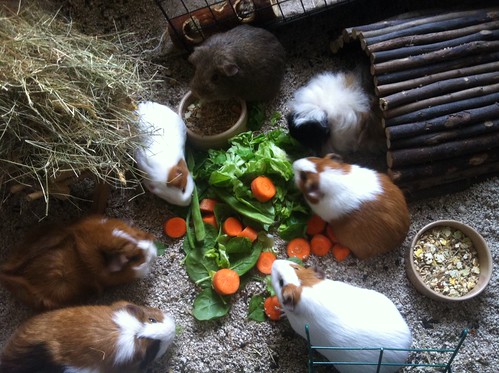 Look up, everypig! Can you see the grass farm sitting on top of the B&B cage? The grass farm which is completely out of reach! 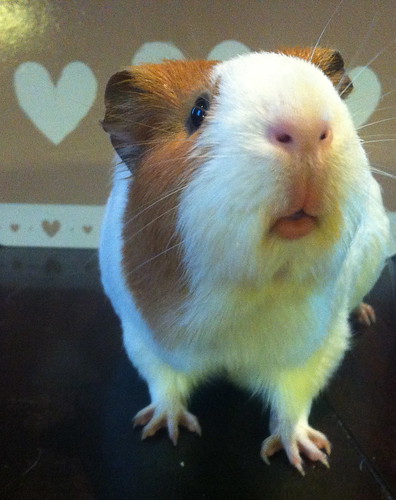 Yes, yes - that grass farm! Have you noticed how the people have forgotten to leave it down here for us to get? How forgetful! 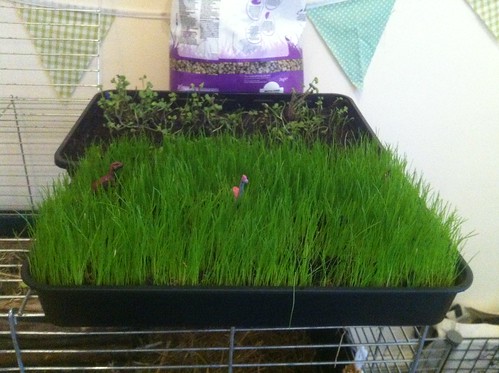 Well, then. There is only one thing to do. Right Fizz and Scribble - stop rooting around and lift this hay rack up on top of that wooden house. Lift me up and I'll eat ... I mean... bring the grass down for us... 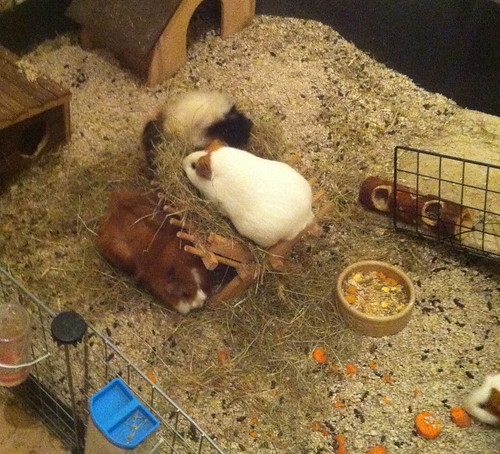 (Apparently Meri's leg has now healed enough for her to get back into mischief.)
Top

Oh, I love it when they're all reaching out super inquisitive with the whiskers exploding around their snout!
Top

In the hayrack. SO cute!
Top

I love how inquisitive Meribel is. She acts like she's never seen hands before in the cage but once she's out she's very interested in what you're doing.

TexCavy - jumping in hay racks is Meri's party trick. She use to always be on top of things even through her pregnancy and up until she broke her leg. She'd cause all of her babies to squeal out after her while she enjoyed a nice snooze out of sight and reach.

To stop her from trying to get higher and after catching Scribble, Fizzpop and Lolly trying to lift the hayrack on top of the hut to get Meri HIGHER, we decided to give the pigs a taste of grass. 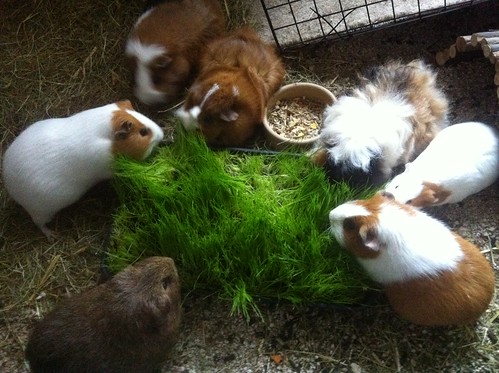 Pickle and Blu are here while their people go on holiday for a few weeks, and could SMELL the sweet smell of grass being chewed. No number of leaves of lettuce could distract them from the prize... 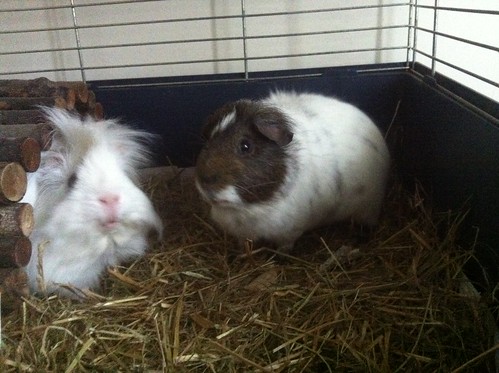 Meribel chewed as fast as her little jaws would chew when she saw me look from the herd cage to the pet sit cage and back again. She knew what I was thinking. 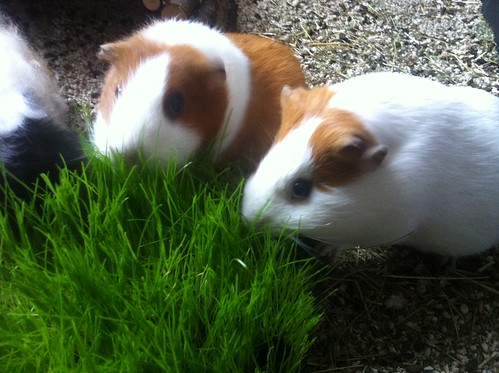 And she was correct. 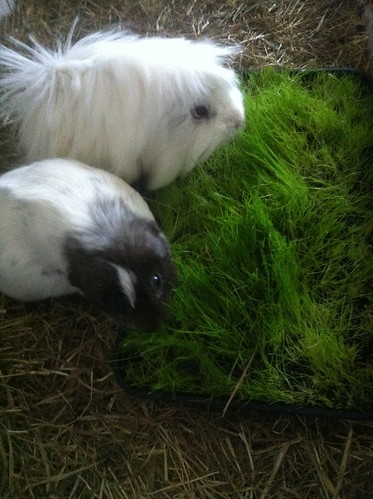 Later on I was surprised to see little Mei had escaped from her cage* and was walking up and down the little container farm. She said that she'd been employed by someone whose name rhymed with Hotel to stop any-other-pig... I mean, unnamed species, from eating the grass without previous consent. 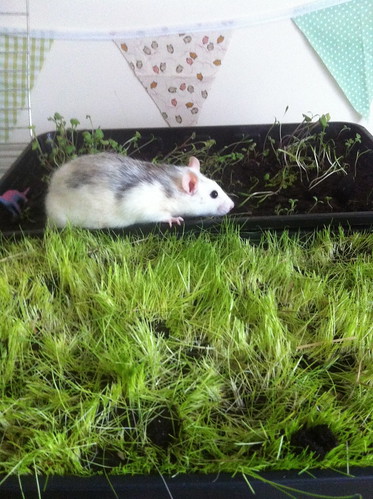 What great pictures! How did you grown the grass?
Top

jacqueline, it's just normal lawn grass seeds on a tray of compost which I kept watered by a window. I thought the seeds would never take and then one morning - BOOM! Lots of little grass faces were peeking up at me.

I have no idea whether just giving it to the pigs or giving them a trim with scissors will be best to encourage it to regrow.
Top

Was it messy for them to eat? Muddy paws? Let us know how it goes. I've always wanted to grown grass, or something, for them.
Top

That grass looks wonderful and I'm sure was a real treat for the pigs. Nice to see such a patch of green in their cage. The visiting pigs must have had a blast chomping on fresh grass as well.
Top

I had a brief experiment with growing a tray of grass and found scissoring it made it go brown on the ends - like when you cut lettuce with a knife. Piggy teeth seemed to not shock it as much.
Top

jacqueline, the picture with Mei (the rat) is after they had eaten it. I didn't check their paws but there was no loose compost in the cage when the pigs were done.

It makes me feel less guilty about not being home from work when the weather is nice and the weather being poor at the weekend when I could supervise them outside. :)

I'll keep you all updated on how it goes. If it works out we'll we might sacrifice a cage-base for the pigs.
Top

Who needs a light bulb when you've got white guinea pigs and sun beams? 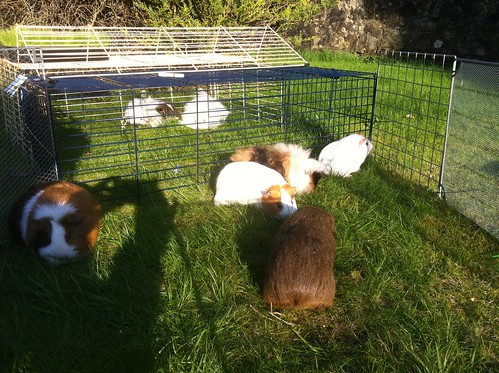 Blu and Pickle (all white) have featured in this Chronicles a few times a year each time their people go on holiday they come for a holiday with me. Blu has the opportunity to sing at the ladies and rumble at our boars.. then take our his frustration on poor Pickle (any part will do.) 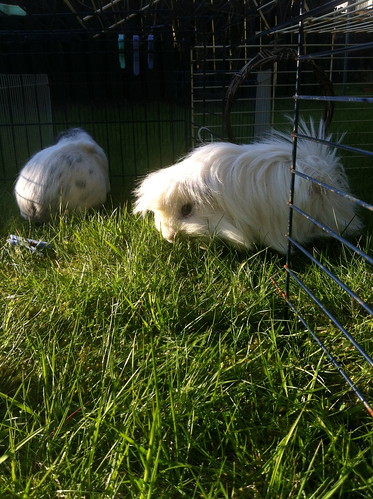 Blu was pulling all of the stops to get the ladies attention. From singing and rumbling at the boars to brute force.
"I will destroy these bars then show you all!" 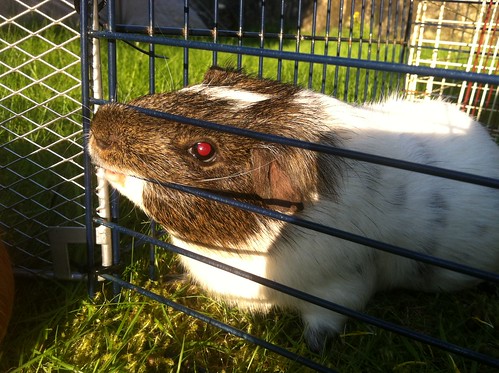 Maisie would like to know whether Blu knows he's not chewing grass. 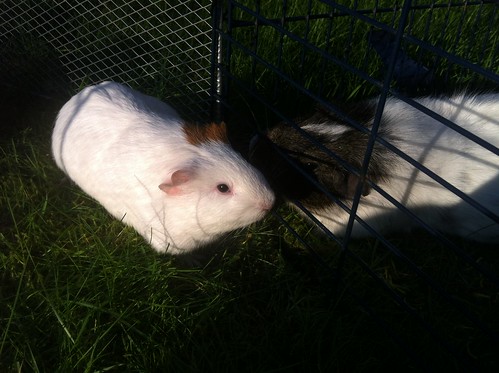 It must be quite annoying to be in full rumblestrut display mode and have an entire group of guinea pigs... not care.

Scribble: There are other guinea pigs behind me? 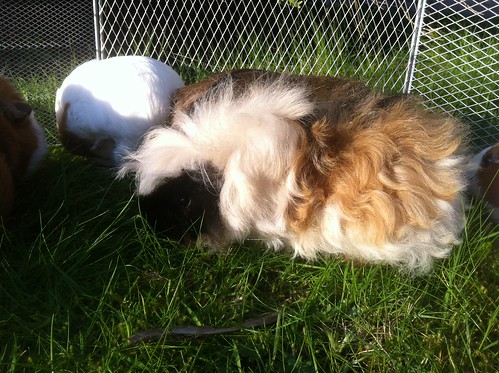 Meribel: I was just thinking about how the grass is greener at the other side of this fence... 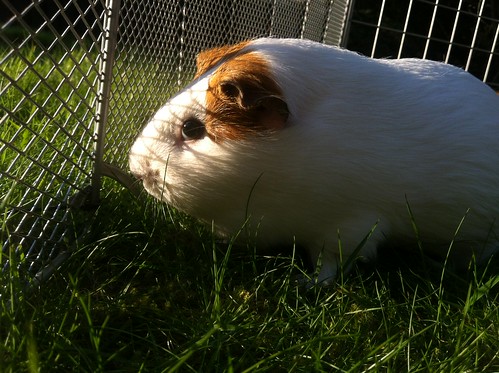 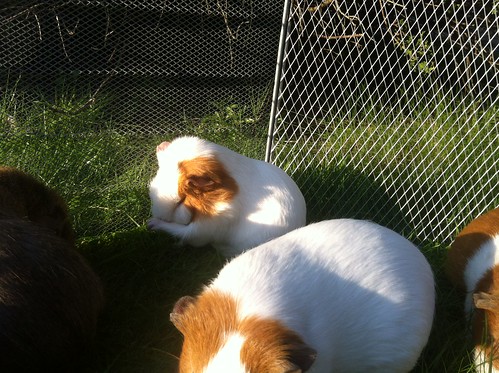 How lucky you all are to be out in the sun! Nice shots. And, as always, Meribel has that glint in her eye. . .
Top
Post Reply 795 posts