We heard about this one ahead of time. We knew the officers were going out and Kara and I were able to get down to Hollister as they were still unloading the trucks.

It was shocking and disgusting. It was putrid and pathetic.

I stopped at the feed store on my way down and picked up a bale of Timothy. I should have bought Alfalfa. Grabbed two bags of carrots out of my fridge. Left my damn camera at home! Luckily I remembered just as I was leaving Kara&acute;s house, and we dashed back to get her camera. The butt shot is me. One of the piggie transfer photos is Kara&acute;s and her sneakers I think. (No faces!

The story is on the album. This first album is really just the receiving. I&acute;m going to go down again, tomorrow or Friday and do more work and try to get as many individual photos as possible. I&acute;ll create a separate album for the individual pigs.

We expect well over 300 pigs after deliveries in the very near term. Fosters only right now, as the woman still technically owns them and they are needed for evidence as well. 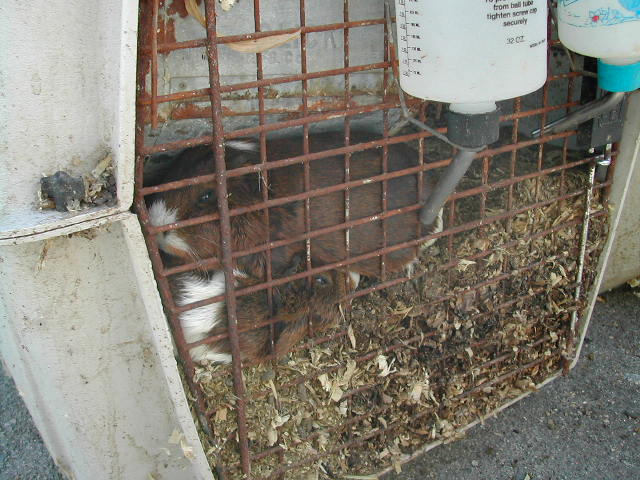 I was adding up the figures yesterday. Including these latest Hollister pigs (but not their expected offspring) we now have in excess of 600 homeless guinea pigs in rescues and shelters in the SF Bay Area.

All of us are shaking our heads in disbelief at the sheer numbers here. Why is it so bad right now? Is it related to the economy? Why is it so bad in our area? Or is it just as bad elsewhere but the pigs are not coming to the attention of the shelters and rescues?

We desperately need foster homes for these pigs, they are now in better conditions than they were, but still far from what they need. Please help by fostering a few pigs if you are anywhere near the Bay Area.
Top

This was one of those experiences we will NEVER forget and wish NEVER happened. We had never seen SO many HEAVILY pregnant sows. We predicted several litters of babies would be born over night. We figured out... over Mac Donalds... that the numbers could easily go to 300 in a matter of days!
Top

I am so distressed to see this latest seizure of neglected pigs. Why now? It never ends, does it. And it seems to be snowballing. The pictures made me seriously ill. Usually, I do fairly well (having seen lots of neglect and abuse in my job), but this is awful!
Top

Uuugh!! That is just awful

I&acute;ve got tears in my eyes just reading and looking at the pictures....

You sounded near the breaking point on the phone last night.. and after seeing this I just don&acute;t know how you were able to hold it together.
Top

I&acute;m just starting to lose it now. I&acute;m already overwhelmed with the pigs I have to care for and I know how impossible this is going to be to get that many fostered out of there in this area.
Top

There was so much to be done that we focused on the task at hand at the time. Our only concern was the pigs. I finally fell apart late last night. It just finally hits.

After all the pigs we in clean cages, had the hay T brought and the carrots you could hear, "Munch...munch...munch!" That was a great feeling to see and hear happy pigs. But the reality of the situation is over whelming.
Top

I live on the east coast and have heard/seen this situation happen with dogs and cats. Perhaps the climate is "better" for the outdoor areas that seem to be used in such a horrible way.

Teresa and KK - You and the other people who help these poor animals are truly caring and dedicated individuals.
Top

How horrible! I would not be able to go through those empty cages and bedding. Thank God you were there to help. Too bad I live too far to foster--who says the kids need their own bedrooms? I could shove them all in one room and use the other two for pig rooms! Seriously, though, I hope this woman does not ever get them back. And although I hate to say it, probably the case against her will be stronger if they do find some bodies.
Top

Lisam, you may be too far to foster these particular pigs, but if you have any spare room I&acute;m bringing a group of rescues up your way the first week of August!!!

MANY to choose from - lots of colors and types!
Top

UGH! UGH! UGH! I adopted Iris and Daphne from a guinea pig rescue lady who lives in Hollister... but she was very anti-breeding. My first thought was... Is it her? I offered to come help with cage cleaning or toenail clipping but she didn&acute;t want anyone to visit (hmmmm... how bad was/is it?)... I am wondering now about her operation. She was nearly impossible to get a hold of when I found out how sick Iris was. I e-mailed her and have not heard from her since. She took a selection of her pigs to a couple of pet stores in the San Jose area once a month and tried to adopt them out to good owners. She was a bit eccentric, but seemed to be devoted to her rescue business.

Good lord this is awful. I cannot even foster any pigs right now... I have a vehicle I was going to donate to the Monterey SPCA... I think I better just write a check.

That is just so horrible... I don&acute;t know what to say. If I am needed for driving or cage cleaning etc... I can do that... or money...

UGH! Why are some people so horrible!
Top

OH NO! You adopted from Susan. The same animal control officer in charge of this rescue is the one doing the welfare check and follow-up on Susan.

Susan scouts the shows and takes pigs the breeders don&acute;t want: breeder culls. (Anti-breeding? Yeah right.) She has way too many pigs for what she can afford and the conditions are bad. She was going to rent an airport locker and move her rescues out there after animal control got on her case (confirmed from two sources). No one (except animal control) gets to go to her house. She comes to you. She does adoption days in the pet store chains that SELL GUINEA PIGS! Hello???

Did you notice she&acute;s not listed on the rescue list on Cavy Rescue?

This was part of a completely unsolicited email I received from someone who ran into her at one of the pet stores:


She had guineas in what reminded me of trapping cages. They were 8 - 10" tall about the width of a few guineas, metal, and she had them stuffed full of guineas.

They had no water no food, the shaving they were pine or some other light color wood chip, with a few strands of grass. I also noticed something that might be due to neglect, their poop was an odd color orange. I&acute;ve never seen any poop that color come from my guineas. Also one was missing fur from it&acute;s lower hind quarters. The other animals looked almost drugged.

I hope my call to the Humane Society will do some help. I will follow up with you and let you know what becomes of the inquiry.

I won&acute;t repeat the physical description. And then there was also this:

she didn&acute;t give me her name, but she did bristle at the mention of your name and cavy spirit.

Big surprise. I believe the trapping-type cages he&acute;s referring to are the standard breeder transport and show storage cages. I don&acute;t know their official term for them. Just go to one show, you&acute;ll see what I mean.

I could tell you more. Hopefully you get the idea. Heart in the right place. Bad execution. Of course, I feel the same way about myself the vast majority of the time.

Those poor pigs. How could someone be so cruel and stupid as to do this?!?!?!? Can&acute;t she tell that the pigs were suffering?.. or is she that thick?? God I hope she doesn&acute;t get them back.
Top

Yes... It was Susan. A few years back now. %$^&#! I am glad she is being investigated. I was new to this guinea pig thing back then. I knew I wanted a rescue pig. I didn&acute;t know about Cavy Spirit. I was just catching on to things like timothy hay only, no pet store pigs and quarantines. It was through Iris that I took the effort to find Dr. Murray and my guinea pigs have benifited greatly!

Where is Susan now? Did they confiscate her pigs?

"Did they confiscate her pigs?" No. She still has her pigs. She is still there, still doing her thing.
Top

As the world turns...

What a wicked web they have weaved!
Top

I live in contra costa county. I was just down in Hollister camping(my husband is a dirt bike nut) two weekends ago. I want to help but I am not sure I can.
Top

Reading and looking at those pictures was pure torture. I&acute;m going to go shower my pigs with kisses now. Teresa, Kara, and everyone else who helped with this rescue, I have to hand it to you... Good Luck with the adoptions/foster homes.

That is terrible! I wish I lived in Cal. I would absolutely take a few piggers!! But since I live in Ohio, But my heart goes out to all of you and those pigs!
Top

Hi. I&acute;ve been reading about all these poor homeless Guinea Pigs in certain areas of the country. Where I live I suppose a few people have them, but I never see any. There are none for sale or to give away.